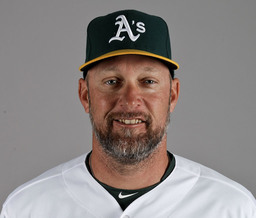 OAKLAND, Calif. (AP) Mark Kotsay arrived for his interview with the Oakland Athletics as if his task was to make a strong first impression.

His bosses, Billy Beane and David Forst, were beyond impressed at his preparation. Kotsay didn't come into the process considering himself a front-runner to become the A's manager just based on his long history with the club.

"He came into the interview as if he never knew us," general manager David Forst recalled.

Still, he emerged as the top choice from six candidates, and the A's named the former outfielder their new manager Tuesday to replace Bob Melvin, who departed this offseason to manage the San Diego Padres.

It sure helps that Oakland's players and staff already know and trust him.

Kotsay receives a three-year contract through the 2024 season, the team. That also includes a club option for the 2025 campaign.

He has quite a support system of friends and managerial colleagues, saying Dave Roberts and Craig Counsell have been great mentors and noting he received congratulatory calls from Jim Leyland, Bruce Bochy and Bud Black.

And, Melvin, of course. He's thrilled.

"He's a perfect fit for the team and the front office as well," Melvin said in a text message. "I wish him the best going forward and know he'll do a great job."

Kotsay is being promoted from third base coach to manage the team for which he played in four of his 17 major league seasons - from 2004-07.

The 46-year-old Kotsay also served as bench coach under Melvin, who came aboard midway through the 2011 season to replace Bob Geren.

"Bob (Melvin) laid the foundation of the culture here over the last 10+ years and that culture was about winning, so ultimately we're going to carry that forward," Kotsay said. "Bob had a level of expectation of how the game is played and I will continue to have that level of expectation. I also think the relationships that Bob built, watching his relationships with the players and again with the front office, I learned a great deal."

Kotsay will be the sixth A's manager spanning the past 36 years and the 19th manager in Oakland history.

The A's went 86-76 this year for third place in the AL West and missed the playoffs following three straight postseason berths.

Oakland won the AL West during the pandemic-shortened, 60-game 2020 season following consecutive wild-card finishes. In the playoffs, the A's beat the White Sox in the wild-card round to stop a nine-game losing streak in winner-take-all postseason games - a major league record that dated to the 1973 World Series - before losing to the rival Houston Astros in a four-game AL Division Series.

A first-round pick taken ninth overall by Miami in the 1996 draft out of Cal State Fullerton, the well-traveled Kotsay was a career .276 hitter with 127 home runs and 720 RBIs for the Marlins, Padres, A's, Atlanta, Boston, the Chicago White Sox and Milwaukee.

Oakland traded for him ahead of the 2004 season, to which Forst said, "This does feel like it's been a little over 18 years in the making."

The A's had hoped to draft Kotsay in '96, but the Marlins didn't budge, so Oakland wound up selecting six-time Gold Glove third baseman Eric Chavez.

When Kotsay retired, Beane - Oakland's executive vice president of baseball operations - actually encouraged him to take a little time away from baseball to spend time with his young family.

"But Mark didn't listen to a darn word I said, immediately took a coaching job," Beane said, "which to me was really part of the passion that Mark has had to do what he's getting ready to embark on right now which is to be a major league manager. It was pretty clear when he playing and when he was done playing that he was on a mission to do everything he could to prepare himself to be a major league manager.