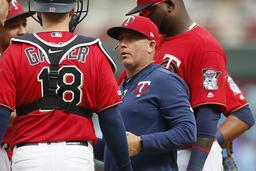 CLEVELAND (AP) Wes Johnson knows the timing isn't ideal for the Minnesota Twins. It's not easy for him, either, or without some personal pain.

Johnson is leaving the Twins to return to his college coaching roots, taking over LSU's program. He said the decision took an emotional toll on him.

"Very tough. I don't know if I've slept a lot in the last week," Johnson said Monday at Progressive Field ahead of the Twins' game against the Guardians. "Very, very, very tough. This the toughest thing I've ever done."

Johnson's move comes as the AL Central-leading Twins open a five-game series against the second-place Guardians, who are two games back in the division. Johnson will fulfill his duties through this series, which concludes Thursday.

Twins president of baseball operations Derek Falvey said the team is having ongoing discussions about how to replace Johnson for the remainder of this season - and beyond. Johnson joined the Twins in 2019 after coaching at Arkansas.

"It does create some juggling," Falvey said. "Our plan here is to work with the internal group that we have to step into Wes' role."

Falvey called Johnson's midseason departure "unique," but said he's confident the Twins are equipped to handle it. So is manager Rocco Baldelli, who called a team meeting Sunday night when the team arrived in Cleveland to inform his players of Johnson's decision.

"We're not going to ask anyone to be Wes," he said. "That's not how life works and that's not how baseball works. We're going to make sure we give our pitchers everything that they need. We're about as prepared for something like this as we could possibly be."

Johnson's exit was as startling as his arrival.

He was widely believed to be the first college pitching coach to jump directly to the major leagues when the Twins hired him from Arkansas, which was the national runner-up in the 2018 College World Series.

Johnson spent nine seasons as a college pitching coach before the Twins plucked him, eyeing his background in biomechanics. He has a master's degree in kinesiology.

"Knowing Wes and getting a chance to enjoy him and see him all these years, it's not incredibly surprising to see him go back to the college game," Baldelli said. "Am I incredibly happy to see it happen in the middle of the season? Of course not. No one is. There's no way around that discussion, but I'm not surprised to see him going back to something he has a passion for and he loves and he's really good at."

Johnson was born in Atlanta and raised in Arkansas, where he has has kept an offseason home. He also had stops at Mississippi State, Dallas Baptist and Central Arkansas. He was a high school coach before entering the college ranks.

Johnson presided over pitching staffs for division champion teams in his first two years. The Twins have returned to the top of the AL Central this season with a 3.78 team ERA that ranks 11th in the majors. The Twins ranked 26th in ERA last year, fourth in 2020 and ninth in 2019 while Johnson was in charge of the staff.

The Twins set a single-season club record with 1,463 strikeouts in 2019. Jose Berrios and Jake Odorizzi were All-Star selections in 2019, and Taylor Rogers made the team in 2021.

"Wes is one of my biggest advocates," Archer said after the 6-0 win at Target Field. "We do a lot of work, mental and physical, in between starts."

Johnson's proud of the impact he's had on Minnesota's young pitchers.

"I think I brought energy every day," he said. "I think every day I prepared to win, just like I'm doing right now and just like I'll do until the end of this road trip. Nobody is going to be look at me and say he didn't show up to work."