Cardinals place Flaherty and Bader on the injured list 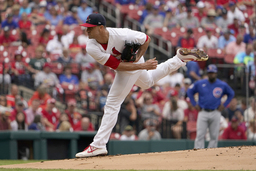 Flaherty was placed on the 15-day list with a right shoulder strain. He left Sunday's start after throwing two scoreless innings.

The 26-year-old missed the first 64 games of the season while recovering from shoulder surgery. He has made three starts and not pitched more than three innings in any one.

Bader, a Gold Glove winner, was placed on the 10-day list with plantar fasciitis in his right foot. He's been dealing with the injury since spring training.

"Hopefully, it's something that we still see him this year," John Mozeliak, the Cardinals president of baseball operations, said of Flaherty. "I mean, we're pretty optimistic that that will be the case based on what we're hearing. But, you know, clearly it's going to take some more time to get him back."

Flaherty had been scheduled for two more rehab starts before convincing the team to activate him. He had made rehab starts in Double-A Springfield and Triple-A Memphis where he gave up one run in seven combined innings before being activated.

Bader said his foot has been bothering him more lately, including consecutive days where he experienced some sharp pain.

"There's just a lot of days left and I just wanted to be smart about, you know, being the best version of myself and this team for the entirety of the season, so I think a small stint at the moment is best for all of us involved," he said.