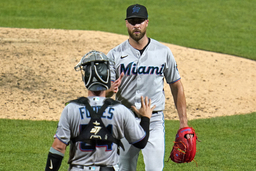 "Two guys that throw hard," Toronto interim manager John Schneider said. "Yeah, it was great. Anything to kind of compliment what we have is awesome."

Toronto was without star outfielder George Springer in the lineup for the third time in the last four games Tuesday night against wild-card contender Tampa Bay due to a right elbow injury.

Schneider said Springer will be re-evaluated on Wednesday.

"I think we'll know more tomorrow," Schneider said. "He's going to do some stuff on the field today and then kind of revisit it, but it's not anything concrete right now. You definitely want to put him in a spot to be good, have success and help us, so we're hopeful that everything goes good. We hope it's not anything crazy where it's going to hinder him and his performance and us."

The Blue Jays also received a player to be named later.