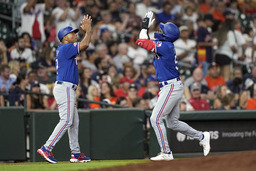 ARLINGTON, Texas (AP) The Texas Rangers fired fourth-year manager Chris Woodward on Monday, a move made in hopes of building momentum toward next year, when the team has long expected to win again after a seasons-long rebuilding effort.

The Rangers are on pace for their sixth consecutive losing season since their last AL West title in 2016. While better than last year's 102-loss team, they haven't made the desired progress this year, or even had a winning record at any point since spending a half-billion dollars last winter to sign shortstop Corey Seager and second baseman Marcus Semien.

"We did not come into this season thinking we had put together a championship roster. We thought we'd taken a major step forward in talent from where we were a year ago," said Jon Daniels, the team's president of baseball operations. "We've certainly had aspirations maybe to overachieve some and still do have those, but we were, and continue to be, realistic about about where we are. ... That said, we did think that we'd be better than our record, and better than the way that we've played at times."

After peaking at 24-24 at the end of May, Texas lost its next three games and five of six. The Rangers, who were 6-24 in one-run games under Woodward, beat Oakland 2-1 on Monday night in third base coach Tony Beasley's first game as interim manager. Texas improved to 52-63 and has won three straight for the first time in two months.

Woodward, the fourth big league manager to be fired this season, was two games shy of managing his 500th game for the Rangers. He finished with a 211-287 record, which came during the extended rebuilding process that also included the pandemic-shortened 2020 season and the MLB lockout last winter after the Rangers had signed Seager and Semien.

Daniels, who was the general manager when Woodward was hired, and current GM Chris Young both spoke about making the managerial change now to start addressing items such as how the team prepares and its style of play.

"I think it's just the overall structure, the environment. It's not necessarily the content of the preparation, but the way it's utilized," Young said. "The way we utilize meetings, the way we utilize different resources throughout the day, creating a structure that's really tailored towards winning a game every single day when we come in, and we felt like at times that got a little loose."

Woodward, who was the third base coach for the Los Angeles Dodgers before landing his first managerial job, was under contract through next season. The team held an option for 2024.

Seager spent his first seven big league seasons with the Dodgers, and was the National League rookie of the year in 2016, the first of Woodward's three seasons as the third base and infield coach in Los Angeles. Seager was reunited with Woodward after signing a $325 million, 10-year contract last December.

"Obviously, he was a really important person in my career and in my life. He was around me at a really pivotal point in my career. And I don't have anything bad to say. I have the utmost respect for him," Seager said on the field before Monday's game. "It's one of those things I just wish we could have played a little better and maybe outcomes would be different. "

Along with Seager and Semien ($175 million, seven years), the Rangers also last winter signed right-hander Jon Gray (four-year, $56 million) to be at the top of their rotation. Gray was in his best stretch of the season before a left oblique injury earlier this month that could potentially sideline him the rest of the year.

Beasley is in his eighth season with the Rangers, and is the longest-tenured member of their big-league coaching staff. He previously was on the major league staffs with Washington (2006) and Pittsburgh (2008-10), and had a 590-472 record in eight seasons as a minor league manager in those organizations.

"He has all the attributes that we're looking for. He has the respect of the staff, the respect of the players," Daniels said. "He's an intelligent baseball veteran, who's won at the minor league level, performed in a variety of roles, both here and elsewhere. ... He's the right person for us as we move forward."