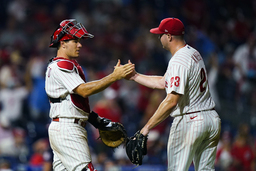 Knebel appeared to injure himself on a pitch to Francisco Lindor in the seventh inning on Sunday and exited the game after meeting with training staff. He is expected to have an MRI on Monday in Philadelphia to determine the extent of the injury.

"We don't know if it's the same thing exactly," Phillies interim manager Rob Thomson said. "We'll know more after today. He couldn't lift his arm (on Sunday), which is kind of normal with this injury."

Knebel signed a one-year, $10 million contract with the Phillies in December, and was the team's closer before being moved into a setup role. He has a 3.43 ERA and 12 saves this season in 46 appearances.

Right-hander Sam Coonrod was reinstated from the 60-day IL and lefty Andrew Vasquez was designated for assignment.