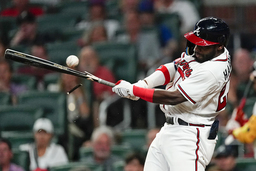 ATLANTA (AP) Rookie outfielder Michael Harris II, whose early-season promotion has bolstered the Atlanta Braves' hopes for another championship run, has signed a $72 million, eight-year contract to remain with his hometown team.

The Braves announced the deal on Tuesday night.

Harris, 21, has emerged as one of the National League's top rookies as an offensive and defensive standout for the defending World Series champion Braves.

Harris is hitting .287 with 12 home runs, 13 stolen bases and 39 RBIs in 71 games after making his major league debut on May 28. He also has provided strong defense in center field.

Harris is the youngest player in the majors and leads all qualified rookies with an .825 OPS.

Harris was born in DeKalb County, Georgia, and was drafted by the Braves out of Stockbridge High School, south of Atlanta.

He was named National League Rookie of the Month for June.