Mike Trout plans to return for Angels on Friday in Detroit 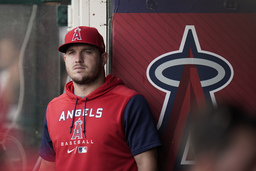 Trout hasn't played since July 12, missing the Angels' past 30 games with an injury to his upper back and ribcage. He faced live pitching Monday and worked out Wednesday, leaving him confident he will be able to play against the Tigers when the Angels open a 10-game trip.

"Ultimately, I want to be out there with the guys," Trout said Wednesday before the Angels hosted the Seattle Mariners. "I miss it. I think with downtime, you come to the field, go home. It's good to spend time with your son and your wife. That was good. But ultimately, you want to be out on the field. I'm excited. If everything goes well, hopefully I'll be in there Friday."

Trout earned an All-Star selection this summer while batting .270 with 24 homers and 51 RBIs in 79 games, but he has missed significant playing time - and the All-Star Game - due to injuries for the second straight season. The center fielder played only 36 games last season before he was sidelined for the year in mid-May by a calf strain.

"We really don't have that much time left in the season," Trout said. "I talked to the front office and I talked to the training staff just to get some at-bats here to see how I felt, and I felt really good."

Last season's disappointment seems to be a motivation for Trout to return with only seven weeks left in another lost season for the Angels (51-66), who haven't made the playoffs since 2014. Los Angeles has plummeted out of the postseason picture again this summer despite being in first place in the AL West on May 11.

After Angels athletic trainer Mike Frostad said last month that Trout's current injury might be something he must monitor for the rest of his career, Trout rushed to assure fans that his career isn't over.

A return to the lineup underlines that commitment by Trout, who is in the fourth season of a 12-year, $426 million contract. He also said he plans to develop a workout plan to strengthen his back during another long offseason for the Angels.

Although his injury might benefit from some light days of action, Trout says he'll keep playing center field to allow AL MVP Shohei Ohtani to remain the Angels' designated hitter.

"I think we have a pretty good DH," Trout said with a grin.