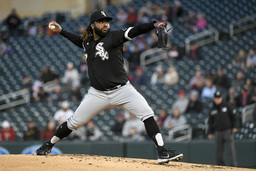 MINNEAPOLIS (AP) Matt Wallner's late-season call-up to his home state team has been a September for the 24-year-old to remember, even if the Minnesota Twins have fallen out of contention.

Wallner drove in a career-high three runs, and Gio Urshela and Jake Cave each had three hits as the Twins beat Chicago 8-4 on Wednesday night, sending the White Sox to their eighth straight loss.

Jose Miranda added an RBI double for the Twins, who tied the White Sox for second place in the AL Central at 76-79 after spending the last 19 days in third. Cleveland blew by both of them over the last three weeks to clinch the division with 10 days left on the schedule.

After an RBI single by Cave put the Twins on the board in the second, Wallner followed with a two-run double down the right-field line that gave them the lead for good.

"He throws it hard, hits it hard and runs fast," Twins starter Josh Winder said. "He's a fun player to watch, and it's fun to watch him at this level grow and learn."

Wallner - a native of Forest Lake, Minnesota, who was the 39th overall pick in the 2019 draft out Southern Mississippi - hit a two-run homer off Lance Lynn on Tuesday. He homered in his first career game off Shane Bieber.

"The results have been encouraging so far. I didn't really have anything in mind, numbers-wise. Just trying to feel comfortable in the box," said Wallner, who has an .841 OPS in 12 games.

Wallner tacked on an RBI infield single in the fifth, when his roller up the line was scooped by Jose Abreu and the first baseman hesitated after considering a throw home to try to get Urshela. It was too late to try to tag Wallner.

The Guardians have an 11-game lead on the Twins and White Sox, who have been two of baseball's most disappointing teams this season.

"There's nothing else you can say. You've just got to put it behind, come back tomorrow and do better," White Sox acting manager Miguel Cairo said.

When Seattle beat Texas later Wednesday, the Mariners finalized the elimination of both the Twins and the White Sox from the wild-card race.

Minnesota's Luis Arraez went 2 for 5 with an RBI to creep closer in the batting race with a .3133 average. League leader Aaron Judge went 1 for 4 and is at .3134. He hit his 61st home run for the New York Yankees to tie the AL single-season record.

Arraez and Boston's Xander Bogaerts (.3087) are the only ones with a legitimate chance to prevent Judge from winning the Triple Crown.

"You're not going to get a hit every time you hit a ball squarely, but he's having really good at-bats right now," manager Rocco Baldelli said. "I think if he continues to focus on that and just swings the bat the way he is, he's going to have a pretty good shot at this thing."

After Bailey Ober set career highs with 10 strikeouts and 7 1/3 innings in the 4-0 win by the Twins on Tuesday, Winder didn't fare quite as well.

The rookie right-hander was pulled with two outs in the fifth inning, with a 5-3 lead after Abreu's RBI single. Winder struck out six batters without a walk, and Caleb Thielbar (4-2) got four outs in relief for the victory.

Johnny Cueto (7-10) lost his fourth straight start for the White Sox, lasting 5 2/3 innings with six runs surrendered. He gave up 10 hits, just like Lynn did Tuesday.

"They just hit balls that were out of the strike zone. I don't know how," Cairo said.

White Sox: 3B Yoan Moncada was out with a bone bruise on his right foot, which he was having X-rays on after hitting himself with a foul ball on Tuesday night.

Twins: 2B Jorge Polanco, who has missed the last 30 games with left knee inflammation and had a rehab assignment cut short two weeks ago following further discomfort, will probably be shut down for the remainder of the season, Baldelli said.