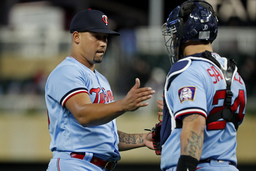 MINNEAPOLIS (AP) The Minnesota Twins came quickly out of the gate after the lockout this spring by making three bold trades and becoming the surprise landing spot for star shortstop Carlos Correa.

Their momentum lasted deep into the summer, with 108 of the 182 days in the regular season spent in first place. After their tumble down the stretch pushed them out of contention in the AL Central and stuck them with an 78-84 record, a mere five-game improvement from 2021, the Twins trudge toward winter facing one of the same big questions as last year.

Should they go shopping for Correa?

"When I go to the mall and I go to the Dior store, when I want something, I get it. I ask how much it costs, and I buy it. If you really want something, you just go get it," Correa said last week. "I'm the product here. If they want my product, they've just got to come get it."

Correa, whose $35.1 million salary this season was the third-highest in baseball for a position player, has an opt-out clause that can make him a free agent - again.

Speaking to reporters after the Twins finished their schedule in Chicago on Wednesday, the 28-year-old two-time All-Star strongly hinted he would exercise his option and test the market - again.

"The decision, it's very simple. I'm going to have some conversations with the front office here and see where their headspace is at and where they are," Correa said. "I talked about marriage in terms of building a long-term relationship and then we go from there, but we all know - you know - the game enough to know what my decision is going to be like."

Despite the fact that the Twins finished 14 games out of first place after being tied at the top with eventual winner Cleveland as late as Sept. 4, Correa raved from start to finish this season about the organization, the ballpark and the community.

That doesn't mean Correa and his agent, Scott Boras, will cut the Twins a discount.

"He's in a unique situation. We knew that when we signed that contract and we'll have to see how this plays out, but we certainly have an interest in seeing him as a Twin in 2023 and beyond," club president and chief executive officer Dave St. Peter said. "I can assure you that."

Correa was everything the Twins were counting on at the plate, in the field and in the clubhouse. The problem is they had so many other players unavailable or underperforming that his impact on winning was ultimately muted. Luis Arraez's batting title was one of the few other positives.

"We got ourselves to a good spot going into September," manager Rocco Baldelli said, "and then a lot of things went the wrong way."

President of baseball operations Derek Falvey confirmed recently that Baldelli will return for a fifth season. The Twins won the division in each of his first two years while going 137-85. They're 151-173 since then.

"Rocco's a big part of our future. Not just next year, but beyond," Falvey said.

The Twins used a club-record 61 players this season. They drew up 152 different batting orders. They used the injured list 48 times.

The Twins concluded that most of the injuries were unpreventable, but nonetheless their medical staff and strategy will receive a fresh round of scrutiny this winter.

"I'm hopeful for a lot of reasons that this is our spike-up year and that there's some regression built in going forward," Falvey said.

The bright side for the Twins was they got 92 games out of All-Star center fielder Byron Buxton, who signed a seven-year, $100 million contract right before the lockout. That was his highest total since 2017, when he played in a career-most 140 games. He blew away his previous personal best by hitting 28 home runs.

Still, the patellar tendinitis and accompanying hip strain he dealt with deprived the Twins of their best all-around for player for nearly half of the schedule.

"He still found a way to go out there and be absolutely one of the best players in the game," Baldelli said. "I think that tells you a lot about his fight and who he is as a person."

Joe Ryan's strong rookie season was one of the few positive developments among the starting pitchers. The Twins acquired Sonny Gray and Chris Paddack in separate trades in March and added Tyler Mahle in a deal in August, but Gray was the only one who stayed relatively healthy by making 24 starts and posting a solid 3.08 ERA.