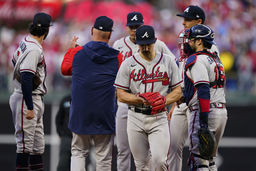 PHILADELPHIA (AP) As rookie Spencer Strider took the mound for the first time in almost a month, the Atlanta Braves mapped out a "best-case scenario" for the young fireballer.

After mowing down the Phillies early in Game 3 of the NL Division Series on Friday, a four-pitch walk to lead off the third inning and a subsequent wild pickoff throw seemed to change everything for Strider.

Pretty soon, he was back on bench, shaking his head in a shaking Citizens Bank Park moments after Rhys Hoskins hammered a three-run homer into the left-field seats.

"I was going to pitch until they took the ball away and try to put up zeroes," Strider said, adding, "it's very frustrating."

The shortest start of Strider's brief career was over in just 2 1/3 innings, charged with five runs. The Braves wound up losing 9-1 and trail two games to one in the best-of-five matchup.

Sidelined down the stretch by a strained left oblique, Strider said he felt fine physically but "just didn't execute pitches."

"We hoped to get four innings out of him. And the way he started out, I thought, man, we're going to be able to do that," Braves manager Brian Snitker said.

"Because it's the playoffs, everything gets sped up a little bit and you do things differently. He felt great. He passed all the tests. It just didn't work today," he said.

The right-hander who turns 24 in two weeks hadn't pitched since Sept. 18 when he beat the Phillies for the third straight time as a starter this season. He also topped them once in relief.

A day before the NLDS opener, Strider signed a $75 million, six-year contract. The NL East champions kept checked his progress and felt he was ready for this opportunity, choosing him to start instead of veteran Charlie Morton.

"We're going to just take him inning by inning. We have kind of a best-case scenario," Snitker said before the game.

With an ample mustache and 100 mph heat, Strider is seen as a big part of the Braves' future. He made his major league debut last season with two relief appearances for the eventual World Series champions and started out this year in the bullpen.

Strider joined the rotation in late May and quickly became a strikeout machine. In 31 games this year, 20 of them starts, he struck out 202 in 131 2/3 innings.

Strider finished 11-5 with a 2.67 ERA and was a sure thing to start in the playoffs until his injury.

When Kyle Wright and Atlanta's bullpen coasted to a 3-0 win on Wednesday, Snitker and his staff saw enough to give the ball to Strider with the series tied.

At the beginning, Strider looked strong.

Strider struck out Hoskins and J.T. Realmuto to end the first inning and fanned Bryce Harper to begin the second.

Brandon Marsh drew a leadoff walk in the third and took third when Strider bounced a pickoff throw to first. Bryson Stott kept hitting foul balls before pulling a slider on the ninth pitch of the at-bat for an RBI double, sending the crowd into a frenzy.

An intentional walk to Kyle Schwarber brought up Hoskins, who had been 1 for 19 in the playoffs this year. Hoskins crushed the first pitch to deep left, punctuating the drive by slamming his bat down.

The next pitch Strider threw was his last, resulting a single by Realmuto.

"I'm not sure if he got tired, but just kind of looked like his stuff went down a little bit," Phillies manager Rob Thomson said. "And I think the at-bat that really got us going was Stotts' at-bat, how he was grinding and grinding, fouling pitches off. And then I think it was a slider that he hooked down the corner."

Pulled from the game, Strider then watched Harper greet Dylan Lee with a long two-run homer for a 6-0 lead.

"I thought if he could get out of that third then that's going to be it. But it didn't happen," Snitker said.

Hoskins' homer came on a fastball at 93.8 mph, down several ticks from Strider's usual velocity.

Strider said he had "no idea" why that pitch didn't have more zip.

"Didn't want to throw a ball that slowly necessarily," he said. "It was right down the middle as well.'