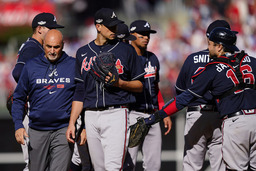 PHILADELPHIA (AP) Atlanta Braves starter Charlie Morton was struck in the pitching elbow by a line drive Saturday and lasted only two innings against Philadelphia in Game 4 of the NL Division Series, the second time in the last two postseasons the right-hander was forced out by a batted ball.

Last year, Morton sustained a broken leg after being hit by a comebacker in Game 1 of the World Series against Houston.

Facing the Phillies, Morton was hit by Alec Bohm's single traveling 71.9 mph to lead off the second. After being checked, Morton allowed a single to Jean Segura and hung a curveball that Brandon Marsh hit for a three-run homer. Morton allowed four hits, walked one and struck out three in two innings.

Morton walked out to the mound for the start of the third inning but could not get loose. He was replaced by Collin McHugh with Atlanta down 3-1.

The Braves began the day trailing two games to one in the best-of-five series.

In last season's World Series opener at Houston, Morton was hit in the right leg by Yuli Gurriel's 102 mph one-hopper leading off the second. Morton remained in the game and threw 16 pitches before he was forced out in the third.