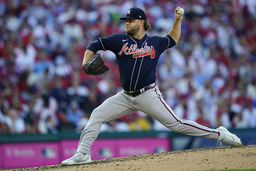 PHILADELPHIA (AP) Charlie Morton took a shot off his pitching elbow that was eerily reminiscent of the comebacker that broke the Atlanta postseason ace's right leg in last year's World Series.

Much like last October, Morton tried to push ahead in his Game 4 start for Atlanta. Unlike last October when he threw 16 pitches on a busted leg -- and earned a World Series ring for his effort -- Morton is headed home with a dinged-up right elbow and a long offseason ahead.

Morton allowed a three-run homer to Brandon Marsh and the Philadelphia Phillies eliminated the Braves 8-3 in Game 4 of the NL Division Series on Saturday. Atlanta's loss meant Major League Baseball hasn't had a repeat champ since the New York Yankees won three straight from 1998-2000.

Philadelphia finished third in the NL East at 87-75, a full 14 games behind the 101-win Braves this season.

But in this series, those numbers were about as empty as the beer bottles strewn over the Phillies clubhouse in their rowdy celebration for reaching the NLCS for the first time since 2010.

"The goal was to get into the postseason. We did and it didn't happen," Braves manager Brian Snitker said. "So you know what, we'll take a couple months off and everybody meet up in North Port in March and get on and try and do it again."

Morton was hit on his pitching elbow by Alec Bohm's single traveling 71.9 mph to lead off the second inning. After being checked, Morton allowed a single to Jean Segura and hung a 2-2 curveball that Marsh launched deep into the right-field seats for a 3-0 lead.

"He got me in a good spot," Morton said. "I don't think he hit it particularly hard. I knew I was going to have to try and stay loose and keep an eye on it. I didn't think that I couldn't throw. It just stinks."

The Braves were 10 1/2 games behind the Mets at the start of June and lost four of five to New York in early August. But they were in familiar territory. Atlanta was 30-35 at one point last season before winning the World Series.

This year, their first since star Freddie Freeman left to sign with the Dodgers, they stormed back to overtake the Mets and win their fifth straight NL East title.

The franchise that put together an unprecedented streak of 14 straight division titles in the 1990s and 2000s tried for one more memorable run a season after winning their first World Series since 1995.

"Losing stinks, especially when you get a chance to finally taste the win," Morton said.

The most puzzling play came in the third inning when Phillies catcher J.T. Realmuto hit a deep drive toward the angled portion of the wall beyond the reach of center fielder Michael Harris II, and the carom rolled along the warning track toward right-center. Ronald Acuna Jr. stood in right field watching the play, and didn't start running toward the ball until Realmuto was well past first base.

The mental miscue helped lead to Realmuto becoming the first catcher in postseason history to hit an inside-the-park homer.

Atlanta appeared headed for a wild card, at best, until it turned into one of the best teams in baseball and ended the season on a 78-34 run. Most memorably, they swept a three-game series from New York on the final weekend of the regular season, claiming another division title on a tiebreaker - and a first-round bye - when both teams finished 101-61.

The Braves have locked up most of the core that should keep them contenders for years. Rookie right-hander Spencer Strider, third baseman Austin Riley and Harris all signed long-term deals this season. Acuna is tied to the Braves until 2027, while second baseman Ozzie Albies is under a cut-rate contract that binds him to Atlanta for three more seasons.

"The longer I've been here, the longer I've seen and noticed how big of an impact he has on every single person in this clubhouse," Braves catcher Travis d'Arnaud said. "I hope he's back."

None of it really mattered in the Braves clubhouse on this day, once they flopped in Philly.