Braves reeling after playoff flop, but excited for future 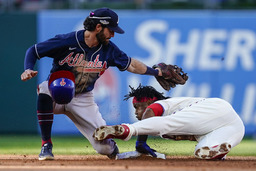 More than four months of dazzling baseball carried the Atlanta Braves to a fifth straight NL East title. Their hopes of repeating as World Series champion fell apart in less than a week.

The season came to an unimaginable end with two dismal performances in Philadelphia, where the Braves were outscored 17-4 and lost the Division Series 3-1 to a Phillies team they beat by 14 games during the regular season.

"Man, I'm disappointed," manager Brian Snitker said Sunday, less than 24 hours after the final game. "Just remembering what we went through this year, and expecting to (win the World Series) again."

Instead, the Braves made their earliest exit from the postseason since 2019.

The wild-card Phillies are now heading to the Championship Series, their title hopes still alive while two 101-win teams that fought to the wire for the division title are all done.

The Braves climbed back from a 10 1/2-game deficit to chase down the Mets, sweeping New York on the final weekend of the season and winning the dramatic pennant race on a tiebreaker to earn the first-round bye.

The Mets were upset in the opening round by the San Diego Padres. Atlanta went down next, doomed by poor starting pitching, an offense that suddenly went cold and a bullpen that couldn't keep it close with the season on the line.

"We didn't do a lot of things well," Snitker said. "We're a better team than the way we played in this Division Series."

For good measure, a glaring lack of hustle by one of the team's best players, Ronald Acuna Jr., marred the decisive game and sparked a tirade from team radio announcer Joe Simpson, who called it "embarrassing."

Still, Snitker said his biggest memory of this team will be the way it fought back to catch the Mets. The future certainly looks bright, with most of the young core locked up to long-term contracts and nearly everyone set to return in 2023.

"We have a great team. We really do," general manager Alex Anthopoulos said. "You have to turn the page at some point."

Snitker, too, is excited about what the future holds.

"We have talented players," he said. "We'll reconvene in March and the goal is going to be to win the division again."

The biggest question heading the offseason is the status of shortstop Dansby Swanson, who is set to become a free agent.

After winning the World Series a year ago, the Braves lost longtime first baseman and team leader Freddie Freeman in free agency.

Another Atlanta stalwart could be headed out the door this winter, though both the Braves and Swanson have expressed a desire to get a new deal done.

That was the case with Freeman, too, but he now plays for the Dodgers.

The Braves have the two leading candidates for NL rookie of the year - outfielder Michael Harris II and pitcher Spencer Strider - and locked them both up to lengthy contracts even though they were years away from being eligible for free agency.

Harris, 21, was brought up from Double-A to bolster the team's defense and wound up being one of the Braves' best all-around players. He hit .297 with 19 homers, 64 RBIs and 20 stolen bases.

The hard-throwing Strider, still a few days from his 24th birthday, solidified the rotation while become the first pitcher in baseball history to record 200 strikeouts and give up fewer than 100 hits.

Kenley Jansen had a big season, leading the NL with 41 saves after signing a $16 million, one-year deal with the Braves.

Anthopoulos said he'd like to bring Jansen back, but the Braves have other options if the 35-year-old signs elsewhere.

Former Angels closer Raisel Iglesias was acquired at the trade deadline and thrived in a set-up role to Jansen. He's also had a pair of 30-save seasons and is under contract to Braves for three more years at $48 million.

Another option is Kirby Yates, who struggled in limited appearances coming back from Tommy John surgery but also has experience as a closer. He was an All-Star who led the NL with 41 saves while pitching for San Diego in 2019.

Kyle Wright led the majors with 21 wins, Max Fried had another strong season and Strider looks to have an extremely bright future.

Beyond that, there are questions marks in the rotation.

Charlie Morton will return to the Braves on a $20 million, one-year deal, providing plenty of experience but needing to improve on an up-and-down season.

The other starting candidates all come with baggage.

Former All-Star Mike Soroka hasn't pitched in the big leagues since 2020 after twice tearing an Achilles tendon, while Ian Anderson endured a miserable season that led the Braves to send the once-budding star back to the minors.

It's time for Acuna to fulfill his potential.

He can be one of baseball's biggest stars, but his numbers coming off a season-ending knee injury in 2021 were rather ordinary (15 homers, 50 RBIs, 29 stolen bases).

Also, his lack of hustle in the season's final game wasn't the first time his work ethic and cocky style of play have drawn scrutiny.

In the NLDS, Acuna failed to back up a play from his right-field position, barely moving until it was far too late to prevent J.T. Realmuto's inside-the-park homer as Philadelphia romped to a series-clinching 8-3 win.