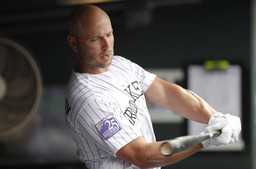 Holliday replaces Skip Schumaker, who was hired last month as the manager of the Miami Marlins.

Cardinals president John Mozeliak acknowledged the club would have a lot of openings to fill late last month, saying he wasn't opposed to hiring someone from outside the organization.

"We want to make sure we're addressing all our needs," Mozeliak said.

He got the best of both of both worlds in Holliday. The 42-year-old slugger, a seven-time All-Star during his 15-year big league career, had been coaching at Oklahoma State in his hometown of Stillwater.

He began his career with the Rockies before spending eight years in St. Louis, where he became a fan favorite. Holliday retired in 2018 after a year with the Yankees and a final year in Colorado.

The Cardinals filled out their coaching staff by choosing Brand Allen, a member of their minor league staff, to replace Ward as their assistant hitting coach. Julio Rangle, who had been with the Red Sox, will be the new assistant pitching coach.

Patrick Elkins will return for another season as the club's run-production specialist. Stubby Clapp will be back as first base coach, Pop Warner as third base coach, Willie McGee as a coach and Jamie Pogue and Kleininger Teran as bullpen catchers.

The Cardinals went 93-69 and won their second NL Central title in the past four years this season. They were swept by the eventual National League champion Philadelphia Phillies in their two-game, wild-card series.