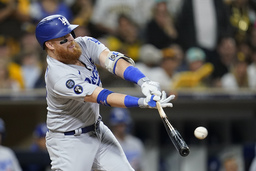 Also not receiving a qualifying offer for the second straight year was Clayton Kershaw. As a result, the left-hander will have additional time to consider his future rather than make a decision at the beginning of free agency. The Dodgers did the same thing last year, and Kershaw signed a one-year deal.

Justin Turner will receive a $2 million buyout. The 37-year-old third baseman could still re-sign with the Dodgers for next year, although likely at a lower salary than the $16 million he would have received if the team had exercised its option. During his nine seasons in Los Angeles, he has been a fan favorite and active in the community.

Turner hit .278 with 13 homers and 81 RBIs in 128 games after slumping early in the season. From the All-Star break on, he batted .340 before going 2 for 13 in the National League Division Series, where the Dodgers were eliminated.

Turner was named MVP of the 2017 National League Championship Series, earned All-Star honors in 2017 and 2021 and helped the Dodgers win the World Series during the 2020 pandemic-shortened season.