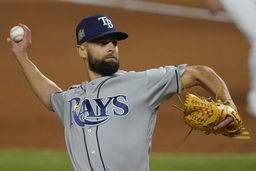 Anderson has been slowed by injuries since putting together an impressive stretch with Tampa Bay. The reliever has a 2.89 ERA and 137 strikeouts in 87 1/3 innings for his career.

He had right elbow surgery in October 2021 and did not pitch in the majors last season. He spent most of the year with Triple-A Durham.

To make room on the 40-man roster for Anderson, infielder Rylan Bannon was designated for assignment.

The Braves continued to add depth to their bullpen. On Wednesday, Atlanta re-acquired left-hander Kolby Allard, its former first-round draft pick, from the Texas Rangers for right-hander Jake Odorizzi and cash.