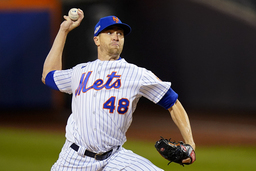 ARLINGTON, Texas (AP) Jacob deGrom is headed to the free-spending Texas Rangers, who believe the health risk is worth the potential reward in trying to end a six-year run of losing.

"We acknowledge the risk, but we also acknowledge that in order to get great players, there is a risk and a cost associated with that," Rangers general manager Chris Young said. "And one we feel like is worth taking with a player of Jacob's caliber."

Texas announced the signing after the 34-year-old deGrom passed his physical. A person with direct knowledge of the deal disclosed the financial terms to The Associated Press. The person spoke on condition of anonymity because the club did not announce those details.

The team said deGrom will be introduced in a news conference at Globe Life Field next week following the winter meetings in San Diego.

"It fits in so many ways in terms of what we need," Young said. "He's a tremendous person. I have a number of close friends and teammates who played with Jacob and love him. I think he's going to be just a perfect fit for our clubhouse and our fans."

The Rangers went 68-94, firing manager Chris Woodward during the season, and then hired Bruce Bochy, a three-time World Series champion with San Francisco. Texas' six straight losing seasons are its worst skid since the franchise moved from Washington in 1972.

After making his first start in early August last season, deGrom went 5-4 with a 3.08 ERA in 11 outings. He helped the Mets reach the playoffs, then passed up a $30.5 million salary for 2023 and opted out of his contract to become a free agent for the first time.

That ended his deal with the Mets at $107 million over four years, and deGrom rejected their $19.65 million qualifying offer in November. New York will receive draft-pick compensation for losing him.

The fan favorite becomes the latest in a long line of ace pitchers to leave the Mets for one reason or another, including Nolan Ryan, Tom Seaver, Dwight Gooden and David Cone.

When healthy, deGrom is perhaps baseball's most dominant pitcher. His 2.52 career ERA ranks third in the expansion era (since 1961) behind Los Angeles Dodgers lefty Clayton Kershaw (2.48) and Hall of Famer Sandy Koufax (2.19) among those with at least 200 starts.

The right-hander is 4-1 with a 2.90 ERA in five career postseason starts, including a win over San Diego in the wild-card round this year that extended the Mets' season. New York was eliminated the next night.

A four-time All-Star and the 2014 NL Rookie of the Year, deGrom was a ninth-round draft pick by the Mets in 2010 out of Stetson, where he played shortstop before moving to the mound. He was slowed by Tommy John surgery early in his career and didn't reach the majors until age 26.

Once he arrived, though, he blossomed. He helped the Mets reach the 2015 World Series and earn a 2016 playoff berth before winning consecutive NL Cy Young Awards in 2018 and 2019.

But injuries to his elbow, forearm and shoulder blade have limited him to 26 starts over the past two seasons. He compiled a career-low 1.08 ERA over 92 innings in 2021, but did not pitch after July 7 that year because of arm trouble.

The addition of deGrom gives the Rangers three proven starters along with Gray and Perez, who went 12-8 with a career-best 2.89 ERA in his return to the team that signed him as a teenager out of Venezuela. Young didn't rule out the addition of another starter.

With several holes on their starting staff, the Mets have shown interest in free agents Justin Verlander and Carlos Rodon to pair with 38-year-old Max Scherzer atop the rotation.

Now, with deGrom gone, signing one of those two could become a much bigger priority.