Zone may hold key for Mavericks, Warriors in Game 5 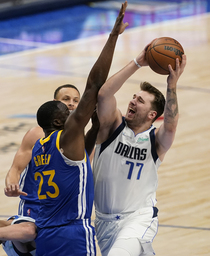 As a former University of California Golden Bear, he should know that his home state is bear territory.

The Mavericks make another attempt to stave off elimination against the Golden State Warriors in the Western Conference finals Thursday night in San Francisco. Much of the focus will be on whether Kidd was correct in his postgame declaration following Game 4's 119-109 home win:

"The biggest compliment we've gotten is they've got to play zone because they can't play us one-on-one."

The Warriors have mixed man-to-man and zone defenses throughout the series. They held the Mavericks to 40 percent shooting -- or worse -- from the floor, including 28.9 percent or lower on 3-point attempts in two of the first three games of the best-of-seven series.

But down 3-0 and needing a win to stay alive at home on Tuesday, the Mavericks gave the Golden State zone a different look, moving star Luka Doncic from the head of the defense to the wing, allowing him to attack against less resistance.

It worked. Doncic didn't have his best shooting night (10-for-26) but still managed 30 points and most important, helped his teammates get their 3-point games going with a game-high nine assists.

Reggie Bullock shot 6-for-10 on 3-pointers and Dorian Finney-Smith added 4-for-7 long-distance shooting, as the Mavericks scorched the Warriors with 20 threes and a 60-30 scoring advantage from beyond the arc.

Golden State star Stephen Curry admitted his team might have been slow to pick up on the Mavericks' new look, but he vowed it'll be fully prepared in Game 5.

"Playoffs are fun. It's a game of adjustments," he said. "You've got to figure it out ... if you can't do it on the fly, then you have a game like (Tuesday). The next 48 hours, you get prepared and come out with another level of focus on what they did."

The teams flew to San Francisco with different reasons for optimism.

The Warriors are 8-0 at home this postseason, with an average winning margin of 118-103. They have never lost Games 4-5 consecutively after taking a 3-0 lead.

On the other hand, the Mavericks believe they easily could have prevailed in their most recent game at Golden State, one in which they blew a 14-point halftime lead.

It's just a matter of making shots, Kidd continues to stress.

"They're going to play zone a majority of the game, so it's going to present a problem for them in terms of giving up 3s," he said. "They're winning the series, but we believe that if we continue to keep getting the shots that we've had, if we make them, it will put pressure on them.

The Warriors hope to have veteran backup Otto Porter Jr. back from a foot injury for Game 5, where a win would vault Golden State to its sixth trip to the NBA Finals in the last eight seasons.