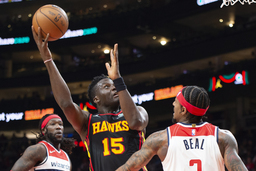 Bradley Beal scored 19 of his 24 points in the first half for Washington, which had its three-game win streak halted and lost its fifth in a row at State Farm Arena. A victory would've given Washington (5-2) its best beginning to a season the 1974-75 Bullets got off to a 7-0 start.

Young went 11 for 11 from the free-throw line as Atlanta finished 29 for 29 on foul shots.

The Hawks, who lost 122-111 at Washington last week, snapped a two-game skid. Bogdan Bogdanovich finished with 16 points for Atlanta (4-3), and Cam Reddish added 15 off the bench.

Washington struggled to pull within double digits after De'Andre Hunter's turnaround jumper made it 105-94 with 5:12 remaining. Bogdanovich followed with a 3 from the left wing, and the Wizards missed a third straight jumper before Reddish, falling near the baseline, fed John Collins with a behind-the-back pass and an easy lay-in to put Atlanta up 110-94 with 3:32 to go.

"The first thing, it always starts with moving the ball," Collins said after tying a career high with six assists. "Moving the ball from side to side is always hard to guard in this league. We have guys that can contribute at a high level and we just wanted to make sure we were executing and putting guys in position where they can play their game. We continued to do that tonight. When we're playing that way, it's always easy to win."

The Wizards closed the lead to eight after Kentavious Caldwell-Pope stole the ball from Young and fed Kyle Kuzma for a layup that made it 110-102 with 1:27 remaining. Hawks coach Nate McMillan quickly called timeout.

Young followed by hitting a pair of free throws, but Spencer Dinwiddie answered with a three-point play that trimmed the lead to 112-105 with 1:14 to go.

After Reddish hit a pair of foul shots, the Wizards called timeout with 57.5 seconds to go before Caldwell-Pope missed a 3, and Collins knocked down two free throws to give the Hawks a 114-105 advantage.

That essentially ended it.

The Wizards, who seemed out of sorts while Atlanta kept switching between man and zone defenses, didn't score in the third quarter until Caldwell-Pope's three-point play at the 7:20 mark. Young and Bogdanovich each hit a 3 that made it 75-60, and Washington coach Wes Unseld Jr. called timeout.

It didn't make much of a difference initially as the Hawks padded the lead to 80-64 on Young's three-point play, but the Wizards closed the quarter on a 17-9 run to make it 84-77 entering the fourth.

"There were at least three stretches where we'd go two and half to three minutes where we wouldn't score," Unseld said. "We made plays late and saw an uptick in the numbers, but those stretches were hurtful. Obviously in the third quarter we struggled and were only able to muster 17 points.

"You know, it's one of those things when those moments happen, we were getting good looks, and it kind of gets frustrating when those don't go down. We can't allow that to affect the other end of the floor."

Atlanta led by as many as 13 in the first half, but the Wizards closed to within three on Beal's 14-footer in the closing seconds before the break. Washington scored 37 in the second quarter.

"I think we're starting to understand where we need to be on offense," Young said. "Guys are getting to their spots quicker and guys are ready to make plays. I think it's going to take time. We're starting to get in more of a flow."

Wizards: Daniel Gafford responded well at the shootaround and was put in the lineup after missing two games with a right quad contusion. He finished with four points and five rebounds in 15 minutes. ... F Davis Bertans collided with Gorgui Dieng in the lane late in the first and hit the floor after hurting his left ankle. He got up limping, hit a pair of free throws and then limped off the floor and into the locker room. He did not return.

Hawks: G Kevin Huerter was given the night off to rest. ... Atlanta outscored the Wizards 20-5 in free throws in the first half. The Hawks were 20 for 20 at the line before intermission. The team's previous high in free throw attempts was 21 in a win over Detroit.

Hawks: At Brooklyn on Wednesday.