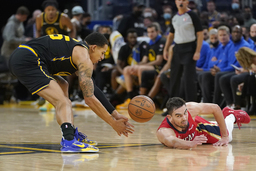 Jonas Valanciunas scored 20 points for the Pelicans. They dropped to 1-9 as they start the season without injured star forward Zion Williamson.

Though Poole continues to emerge as a featured scorer alongside Curry, Warriors coach Steve Kerr is just as pleased with the production from his bench. Golden State's reserves outscored New Orleans' 57-30.

"I thought New Orleans really came out in that first quarter playing hard and knocking down shots," Kerr said. "The bench came in and kind of settled us down and got some stops and got the game back (under control)."

Golden State has won 15 of its past 17 against New Orleans in the Bay Area.

The Warriors led by as many as 15 in the first half, but entered the intermission with just a 54-50 lead. They opened things up with a 22-6 run in the third, a chunk of which came with Curry resting on the bench, and took an 88-66 cushion into the fourth.

Payton, gaining a bigger role in the Warriors' rotation, had seven points in the third and a handful of crowd-pleasing dunks on the night.

"We've just got to be tougher," Pelicans coach Willie Green said. "That's a really good team and they played like it. They turned it up in the second half."

Though the Warriors' 126 points were a season high, their defense continues to play just as big a role in their early success.

They held New Orleans to 35.6% shooting Friday. Golden State now has held its last three opponents to fewer than 100 points and less than 40% shooting from the floor.

The Pelicans did have a few standout moments in the ugly loss. One came in the second quarter, when Trey Murphy III rejected Poole's layup attempt after Poole made a flashy crossover move and drive to the basket that drew a big reaction from the sellout crowd.

Green served on Kerr's staff for three seasons, including two championship runs in 2017 and 2018.

Green said the two keep in touch regularly. That wisdom likely comes in handy as Green endures a tough start to his first season as an NBA head coach.

"I learned to be poised (from Kerr)," Green said. "How important it is to always take in the human factor when dealing with players. Steve has a great way about him."

Warriors: Kerr said he'll continue experimenting with how he spreads out Curry's minutes. Curry typically has started the second quarter on the bench, but Wednesday against Charlotte, he got a brief rest in the first quarter and started the second on the floor surrounded by reserves. "It was a chance for us to see him leading the second unit, which was very interesting," Kerr said. Kerr's goal is to cap Curry at 33 or 34 minutes a game to keep him fresh. . Andre Iguodala had 10 assists off the bench Friday, the first time in franchise history a player has come off the bench to dish double-digit assists in fewer than 18 minutes.

Pelicans: At Dallas on Monday night.