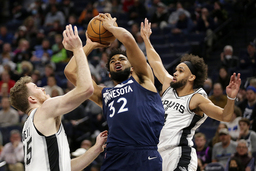 D'Angelo Russell added 22 points, and Malik Beasley hit five of Minnesota's season-high 21 3-pointers for all 15 of his points.

Devin Vassell scored 18 points for San Antonio, and Larry Walker IV and Keldon Johnson each had 12. The Spurs have lost four in a row.

On Wednesday night, Minnesota coach Chris Finch called out his team for poor defense and rebounding in the first half of a victory over Sacramento. The Wolves responded by leading wire-to-wire and outrebounding the Spurs 47-42. San Antonio shot just 41.7% from the field and its 90 points was a season-low.

"They did everything we talked about doing - being ready, being sharp, and our defense, I thought, was excellent out there in the first," said Finch, who pointed to improvements across the board. "Both sides of the ball - the shooting, the passing, the rhythm, the defense, the rebounding. Turnovers were down. It's been a long time coming for us to play this way. Now we've got to play way more like this."

Anthony Edwards, who scored 16 points in the fourth quarter of Minnesota's victory over Sacramento on Wednesday, stayed red-hot early, scoring the game's first seven points. The streak was snapped when Edwards assisted on Russell's 3-pointer.

Towns followed with a 3 of his own and the Wolves led 13-0. The cushion eventually ballooned to 22-3 as the Spurs started 0 for 9 from the field.

It wouldn't stay that way for long, however. With Vassell and Walker providing energy off the bench, the Spurs' shots began to fall. After their frigid start, the Spurs made 20 of their 34 shots the rest of the way before the break.

Minnesota's lead was whittled down to as little as five in the second quarter, but Towns scored six points in a 9-0 run to close out the first half, giving the Timberwolves a 66-53 lead.

"I think the next step for us is when we build a huge lead like we did tonight, don't give them a chance to get it back into single digits," Towns said. "That's what the great teams do."

The Timberwolves entered the game shooting an NBA-leading 42.6 3-pointers per game. Making those shots is another story, and they've had a hard time doing that as their 32.5% shooting percentage beyond the arc was 24th in the league.

"We've got to keep shooting 3s to keep these people honest," said Towns, who made three of his four 3-point attempts. "Like I said (Wednesday), they'll start falling one day. I just didn't know that day would be today."

Spurs: C Jakob Poeltl returned after missing seven straight games due to the NBA's COVID-19 protocols. Coach Gregg Popovich said the team planned to ease Poeltl back into the lineup. He entered the game for the first time late in the first quarter and played 15 minutes overall.

Timberwolves: Taurean Prince was ejected for a flagrant foul committed against Walker with 5.8 seconds left in the third quarter.

Spurs: Begin a four-game home stretch on Monday when they host Phoenix.

Timberwolves: Wrap up a four-game home stand on Saturday when they host Memphis.