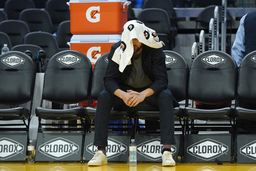 SAN FRANCISCO (AP) Stephen Curry took a few minutes after another spectacular performance to return to the court and cheer up emotional teammate Klay Thompson when his Splash Brother needed some moral support.

The Golden State Warriors are counting the days until the star shooter can get back out there with them to chase another championship - though it's clear how much Thompson is missing this winning start as he moves closer to playing again at last.

Afterward, Thompson remained on the bench for more than 20 minutes - acknowledging earlier in the week after resuming full-court scrimmaging that this has been a taxing rehab grind after back-to-back serious injuries. First was surgery for a torn ACL in his left knee suffered in Game 6 of the 2019 NBA Finals, then a right Achilles tendon tear that needed repair last year before the preseason even started.

"I kind of predicted this would be the hardest part of his journey because he's got the basketball back in his hands every day, he's feeling like himself, he's playing pickup and he's around our practices and back with us in those type of situations, but he's still not on the court," Curry said.

"The good thing is we're talking weeks instead of months now. I'm super proud of just the way he's approached this two-year window because unless he wants to write a book and tell every step of the way, nobody will understand what he's been through away from the game so long. And it shows how much this game matters to him."

Coach Steve Kerr also went to check on Thompson, his head covered in a towel as fans cheered his name before being asked to exit Chase Center.

"He's right there getting toward the end of the road or beginning of the road, however you choose to look at it," Draymond Green said. "He has these days from time to time, and I understand it as far as I can understand without going through it. I don't know many people who love basketball the way Klay loves basketball, or love competing the way he loves competing."

Anfernee Simons hit a 3-pointer with 5:31 left that pulled Portland within 100-92, only for Curry to connect from long range the next two Warriors possessions. Simons scored 19 points off the bench with five 3s.

Damian Lillard's streak of nine straight games with 20 or more points ended, as he finished with 16. He had an uncharacteristically quiet game playing back home in the Bay Area, shooting 5 for 15 and missing his initial five 3-point tries before knocking down two in a row from long range in the final 2:33.

Green contributed 12 points, 12 assists and eight rebounds, and Jordan Poole had 14 points and five assists for the NBA-leading Warriors (17-2).

Blazers assistant coach Scott Brooks was ejected after the halftime buzzer for a pair of technical fouls.

Nurkic finished with 17 points and CJ McCollum 16 for Portland, which shot 41.9% - just below the Warriors' 42% opponents' shooting percentage coming into the game.

Lillard got to spend Thanksgiving Day at home with family in Oakland, fortunate how the schedule worked out.

"It was perfect, it worked out perfect," he said leaving the court from warmups.

Lillard picked up a technical foul 24.8 seconds before halftime, upset about a no call.

The Warriors held a moment of silence before the game for longtime team doctor, Dr. Elliott Schwartz, who died Friday after a short battle with cancer. He also worked with the Oakland Athletics.

"Just a beloved figure around the Warriors for many, many years," coach Steve Kerr said while offering condolences to the family during his pregame media session.

Trail Blazers: The Blazers are 1-9 on the road. ... Portland began 3 for 14 from deep and 11 of 31 overall before a timeout by coach Chauncey Billups at the 5:49 mark of the second quarter with his team trailing 38-30. ... Nurkic picked up his fourth foul at the 2:56 mark of the third after Green drove by him again after dribbling past the big man for a one-handed slam with 4:23 to go in the period.

Warriors: Veteran swingman Andre Iguodala missed his fourth game in a row with soreness in his right knee. "He had some swelling and when you get older, things take longer to heal. In my case, years," Kerr said. "This is what happens when you have that much mileage. Something happens and it keeps you out a little bit longer. It's not a long-term concern." ... G Damion Lee - whose wife Sydel was expecting the couple's first child, a boy - was away for the team for personal reasons, and brother-in-law Curry might have provided a hint when he put a ball under his jersey and then pushed it out. ... Green notched his second game of the season with double-digit assists. ... The Warriors have won 11 of the last 13 against Portland at home.

Trail Blazers: Visit the Jazz on Monday night in the first of four meetings between the teams after Utah won the season series 2-1 in 2020-21. Portland planned to stay in the Bay Area through the weekend.

Warriors: Visit the Clippers on Sunday, having lost the last meeting in the rivalry at Staples Center.