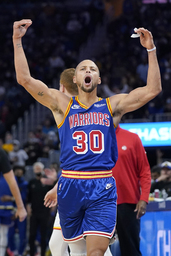 SAN FRANCISCO (AP) Sure, Stephen Curry would have loved to set the career 3-pointer record at home, even if it would have been one heck of a feat.

He tried mightily to do it.

Curry scored 22 points and moved within nine 3s of tying Ray Allen's record, and the Golden State Warriors held off the injury-depleted Portland Trail Blazers for a 104-94 win Wednesday night.

"To make that many 3s in one game obviously has never been done before, so it was just a routine night," coach Steve Kerr said of the 16 Curry needed coming into the game to top Allen. "He made six, which is nothing for him. I don't think I ever did that in my entire career one time."

The reigning NBA scoring champion shot 6 of 17 from beyond the arc, missing his initial four 3-point tries before connecting at the 5:55 mark of the first quarter. Curry went 4 of 12 in the first half on 3s as Golden State held a 47-45 edge at the break.

Norman Powell scored 26 points but went 1 for 7 from deep, and the Blazers made just 8 of 30 on 3-pointers. Portland missed injured star guards Damian Lillard and CJ McCollum.

"Strange," Kerr said before the game. "I don't think we've ever faced Portland without both of them, so they're in a tough space right now."

Kerr fully expected Curry to shoot as many times as he could from deep to try to get this done for the home fans at Chase Center before the team hits the road for five games.

"I feel like it will be special no matter what because I'll make it special and it will be an amazing experience for me and my teammates," Curry said this week.

Draymond Green had 10 rebounds, eight asissts and five points, and Jordan Poole scored eight of his 20 points in the third quarter as Golden State started to pull away. Otto Porter Jr. contributed 15 points and six rebounds off the bench as the Warriors improved to 21-4.

"I'm just along for the ride," Porter said, noting his job will be to help Curry "get open looks."

Jusuf Nurkic had 12 points, 13 rebounds and six assists before fouling out late. Nassir Little scored 18 points for the Blazers, making all five of his first-half shots.

Earlier in the day, Lillard reiterated he doesn't want to be traded by the Blazers.

"It's the truth," he said while heading into the locker room after warmups.

Not that anyone was surprised he still feels so strongly about staying put with Portland.

"He's said it numerous times," coach Chauncey Billups said. "He's a Trail Blazer, period. He doesn't want to go anywhere, he's not going anywhere. He believes in what we're doing here. That says a lot, because we've been going through a ton, on the floor and off the floor, we've been going through it a little bit. He's the type of player and superstar that every team wants to have. ... I thought it was beautiful."

Billups noted that the moment Curry crosses midcourt "he's got a bullseye on him" as a threat to shoot.

"I just think he's just the greatest combo guard to ever play the game," Billups said.

Trail Blazers: Lillard sat out to rest and protect an abdominal injury while McCollum is sidelined indefinitely after being diagnosed with a collapsed right lung. ... Cody Zeller (bruised right quadriceps) and Anfernee Simons (sprained right ankle) also missed the game. ... Portland has lost 12 of its last 14 on the Warriors' home floor. ... The Blazers dropped to 1-11 on the road.

Warriors: Green was hit with a technical at the 7:42 mark of the first. ... Golden State has held opponents to below 50% shooting in 27 straight games dating to last season.

Trail Blazers: Host Minnesota on Sunday in the first of four meetings between the teams this season.

Warriors: At Philadelphia on Saturday night having won the last two vs. the 76ers.