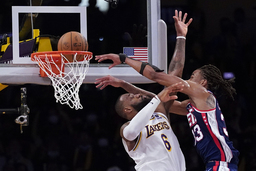 LOS ANGELES (AP) Short-handed and on the verge of a crushing fourth-quarter collapse, the Brooklyn Nets went right at Lakers star LeBron James.

"Until this is over, until we can get our full roster, I think the motto is, `find ways to win,' and we've been doing that," Nets guard James Harden said.

This time, that meant right over James' head.

Nic Claxton threw down a tiebreaking alley-oop over James with 40.7 seconds left, and Harden and the Nets returned from a week-long COVID-19 hiatus to beat Los Angeles 122-115 Saturday night.

Harden had 36 points, 10 rebounds and 10 assists. The last helper was a lob that Claxton caught with two hands while soaring over James, who had just helped Los Angeles erase a 20-point deficit. Claxton posterized the 17-time All-Star, then made a free throw for a three-point play and a 118-115 lead.

It had been more than two weeks since Harden last played, missing time because of a stint in the NBA's health and safety protocols before the Nets had their past three games postponed because they didn't have enough players.

After "doing a lot of nothing," as Harden described it. "A lot of video games and binge-watching."

This one was worth seeing.

Patty Mills added 34 points for the Nets, who were still without Kevin Durant and Kyrie Irving, among others. Bruce Brown had 16 points and DeAndre' Bembry had 15.

"Obviously missing a lot of our guys, some guys had to step up and they did that tonight," Harden said.

James matched a season high with 39 points to pass Kobe Bryant for most career points on Christmas Day, but it was not enough to stop the Lakers' losing streak from reaching five. Russell Westbrook had 13 points, 11 assists and 12 rebounds for his second career holiday triple-double, and Malik Monk chipped in 20 points.

James passed Bryant with the first of two free throws with 3:52 left in the first half of his 16th game on Christmas, tying Bryant's record for most appearances. James has 422 points on the holiday to Bryant's 395.

"I don't really care about the way I play if it comes in a loss," James said.

Harden figured he would be able to get some rest when the Nets took a 102-82 lead into the fourth quarter, only for the Lakers to come roaring back and tie it on Monk's layup off a pass by James with 45 seconds remaining.

Then Harden went back to Claxton on the alley-oop. Westbrook missed a dunk at the other end, and Harden knocked down four free throws to see out the win.

"It wasn't supposed to go like that, you know?," Harden said. "It's supposed to be not a 39-minute game (for me), but at the end of the day, you know, I just wanted to win and that's all that matters."

The Lakers are limping toward the new year with a 16-18 record.

"We just as mad as everybody else, man, probably even more because, like I said before, we all know what we got to do," Monk said. "And sometimes we do, and sometimes we don't, and we're not going to win like that and everybody knows it."

Harden is the eighth player to record a triple-double on Christmas, joining exclusive company after Kemba Walker of the Knicks did it earlier in the day. James, Westbrook, Draymond Green, Billy Cunningham, John Havlicek and Oscar Robertson round out the club.

"Sometimes I think he should be more aggressive, but he always makes the right play," Brown said of Harden's fifth triple-double this season.

The triple-doubles from Harden and Westbrook marked the first time opposing players did it in the same Christmas game.

Westbrook joined Robertson as just the second player with multiple triple-doubles on Christmas, something Robertson did four times. However, Westbrook made just 4 of 20 shots and the Lakers were outscored by 23 points with him on the court.

Claxton finished with nine points, six rebounds and five blocks. ... Darren Collison had no points, one assist and two rebounds in 12 minutes in his first game after signing a 10-day contract with the Lakers. The 34-year-old, who was born in Rancho Cucamonga and starred at UCLA, had retired in 2019 after playing 10 seasons with New Orleans, Indiana, Dallas, the Clippers and Sacramento. . It was the first event in the newly renamed Crypto.com Arena, marking the start of a more than $700 million naming rights deal believed to be the largest in sports history for the home of the Lakers and NHL's Kings. The Clippers have also been tenants since the venue opened in 1999 but will depart for their own building in Inglewood in 2024.

Nets: At the Clippers on Monday.

Lakers: At Houston on Tuesday.