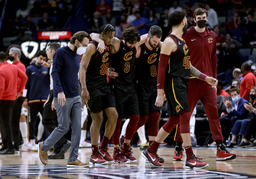 NEW ORLEANS (AP) Garrett Temple nailed four of his five fourth-quarter 3-pointers in a decisive flurry and rookie Herb Jones scored a career-high 26 points to lift the New Orleans Pelicans to a near-record 108-104 comeback victory over the Cleveland Cavaliers on Tuesday night.

The resurgent Cavaliers lost guard Ricky Rubio to a late knee injury after he nearly finished with a triple-double.

The Cavaliers led by as many as 23 points in the first quarter, but the Pelicans chipped away with aggressive defense to record the second-biggest comeback in franchise history. The largest was from 24 points down to the Boston Celtics last Feb. 21.

Rubio, starting with Darius Garland sidelined due to health and safety protocols, had 27 points, 13 rebounds and nine assists before injuring his left knee on a non-contact stop in the lane with 2:20 left. Rubio had to be carried off the court by teammates.

Coach J.B. Bickerstaff said the extent of Rubio's injury had not yet been determined.

However, Cavaliers forward Kevin Love, one of Rubio's closest friends, offered a sober assessment of what looked like a nasty injury.

"It's really hard for me because I could see the pain he was in when he went down," said Love, who finished with 24 points. "Him and I have such a history. I really care for him. I'm just praying that he's going to be OK. We don't know what the near future is going to hold for him. We're just completely gutted. He was having such a great season."

"He didn't have a good first half, but he got himself going," Pelicans coach Willie Green said. "Garrett's been huge for us, on and off the floor."

Jonas Valanciunas made four free throws in the final 28.7 seconds to seal the victory, the Pelicans' fifth in six games.

In building a 39-20 first-quarter lead, Cleveland made 9-of-12 3-pointers, with Love making all four from long range for 12 points.

The Cavs' perimeter shooting went ice cold in the second quarter - Cleveland missed all 10 3-pointers - allowing the Pelicans to trim the deficit to 58-48 at halftime. Jones, normally a defensive specialist, led all scorers with 17 first-half points.

Asked about his growing offensive prowess, Jones said he had not had a scoring game like that "since maybe high school."

"I try not to pay attention," Jones said. "Some teammates kept telling me how many points I had. I just tried to stay focused on the next play. It worked out in my favor tonight. I just tried to attack space."

The Cavs led 80-68 late in the third quarter but New Orleans closed to 83-76 heading to the fourth.

Cavaliers: C Jarrett Allen and G Garland, averaging 19 points and 7 assists this season, sat out due to COVID-19 protocols. . The Cavs had won seven of their previous eight games, with each victory coming by double digits. . Rookie C Evan Mobley came off 10 days of COVID absence to score 22 points and grab seven rebounds in 30 minutes.

Cavaliers: At Washington on Thursday night.

Pelicans: Have a three-day break before traveling to Milwaukee to face the Bucks on Saturday.