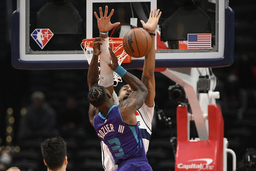 Charlotte, which lost to Phoenix by a season-high 34 points on Sunday, was led by Gordon Hayward's 27 points. Terry Rozier scored 25 points and Miles Bridges added 23 points and a season-high 14 rebounds.

"I'm just being really aggressive," Kuzma said. "I just put my head down and try to get to the rim, take an open 3 if it's there. If not, not try to settle."

Beal again started at point guard as four others were in the NBA's health and safety protocols. He had eight assists and seven rebounds.

"They played well. They made shots. We had plenty of shots to win this game tonight, and we just didn't," Charlotte coach James Borrego said. "They made more plays, more shots than us tonight."

Beal has played with John Wall and Russell Westbrook and says that it's a pleasure sharing the court with Kuzma.

"He's a willing learner. He accepts criticism," Beal said. "He doesn't think too highly of himself. He wants to win. You can see that."

With Wall and Westbrook, Beal was making the adjustment. Now, others must adjust to him as he leads the Wizards.

"I'd be lying if I said it was easy," Beal said. "Anybody who was a leader would say it's not leading a team, but it's what I'm prepared for and I'm excited about, and I embrace. Everything I do, my approach, my mentality, my body language, all that stuff, has a direct effect on my teammates, and as a leader, sometimes you don't understand that, and it takes a long time to develop that."

Washington erased a 14-point Charlotte lead in the third quarter and began the fourth quarter with 11 straight points.

"I thought the game turned at the start of the fourth quarter," Borrego said. "A big part of this loss was that group right there, not getting stops, not being back."

Hornets: C Vernon Carey Jr., F Scottie Lewis and F PJ Washington are in the health and safety protocols. . Borrego was assessed a technical in the first quarter. . Rozier scored 13 points in the final 2:41.