Barrett has 32, Randle has big return as Knicks beat Pacers 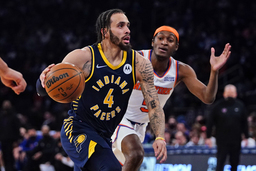 NEW YORK (AP) RJ Barrett scored 24 of his 32 points in the first half, Julius Randle had 30 points and 16 rebounds in his first game after coming off the COVID-19 health and safety protocols list, and the New York Knicks beat the Indiana Pacers 104-94 on Tuesday night.

"With both guys the most important thing is them attacking the rim," New York coach Tom Thibodeau said about Barrett and Randle. "The aggressiveness of RJ attacking the rim, and for Julius to do what he did today is just remarkable.

"We had no idea what he was going to be like. So, unbelievable effort. Unbelievable game. Sixteen rebounds. Just all the things that he did."

"I'm not just here to survive," said Sykes, who signed with the Pacers as a free agent on Dec. 27. "I'm here to thrive. I want to be in the NBA for a long time. So I'm going to continue to work and have that mindset and outwork everybody."

The New York-Indiana rivalry in the mid-to-late 1990s was among the NBA's must-see matchups. This game was far from it, with a decimated Pacers squad taking on a Knicks team nearly back at full strength.

Malcolm Brogdon, Chris Duarte, Isaiah Jackson, Jeremy Lamb, Caris LeVert, Goga Bitadze, Kelan Martin and T.J. Warren all missed the game for Indiana as they were in health and safety protocols. T.J. McConnell did not play as he is recovering from right wrist ligament surgery. By comparison, New York was aided by the returns of Randle, Mitchell Robinson and Jericho Sims from protocols.

It was tied at 55 at halftime, even with Barrett's huge first half. The Pacers, who trailed by 12 early in the second quarter, finished the final seven minutes of the period with an 18-8 run.

"Just trying to be aggressive," Barrett said of his approach early in the game. "That's really it. When you get into the paint, you make reads: You (have) to finish or kick out. It puts pressure on the defense."

Randle took over in the third, scoring 14 points on 5-for-7 shooting, including 2 for 2 from 3. New York led 84-77 after three and Barrett, Randle and Burks took turns knocking down big shots in the fourth.

Pacers: Rick Carlisle will be coaching Indiana at home on Wednesday while his one-time team, the Dallas Mavericks, will retire Dirk Nowitzki's number before their nationally televised game against the Golden State Warriors. "I'm really disappointed that I'm unable to attend that (ceremony)," Carlisle said. Carlisle coached the Mavericks from 2009-21. "It's (going) to be so special. . Dirk just means so much to so many of us and he proved to be a great champion as well. It'll be very emotional."

Knicks: Thibodeau disagreed that an upcoming stretch of eight games out of 10 at Madison Square Garden could benefit his squad. "We can't look ahead," Thibodeau said before the game. "We're not going to win just because we're home. That's not how you win. We've got to come in and put the work into it."