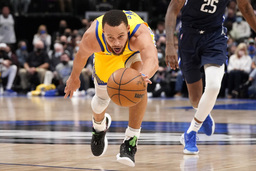 The league's most prolific player from deep isn't concerned about the mini-slump he couldn't shake.

Luka Doncic scored 26 points and the Mavericks celebrated the retirement of Nowitzki's No. 41 by beating the cold-shooting Curry and the Warriors 99-82 on Wednesday night.

"The body of work over the course of this year's been pretty solid," said Curry, who scored 14 points and made just five of 24 shots coming off his worst shooting night of the season. "This stretch has not been great not up to my standards. So you've just to stick to the program. It'll come around."

The Mavericks knew the night belonged to their franchise icon, and that Nowitzki's No. 41 wasn't going to the rafters until after they played the team with the NBA's best record coming in.

Dallas responded with its first four-game winning streak of the season in Doncic's third game back since a career-long, 10-game absence caused by left ankle and knee issues and a positive COVID-19 test.

Playing without European sidekick Kristaps Porzingis, who went into the health and safety protocols just as Doncic came out, Dallas' 22-year-old sensation played aggressively and was 10 of 12 on free throws with eight assists and seven rebounds.

The only concern for the Mavericks was Doncic limping off the floor in the final two minutes and not returning. He said his tweaked right ankle wasn't a concern.

"There are so many things going through your head," said Jason Kidd, the point guard when Nowitzki led the Mavericks to their only championship in 2011 and now the Dallas coach who wore a green Nowitzki jersey to his meeting with reporters before and after the game.

"You know the Warriors are going to score. Steph is going to make 3s. We just tried to make it as tough as possible and on offense take care of the ball. And our defense did a great job in giving us a chance to win."

After missing all five attempts from deep before halftime, Curry connected nine seconds into the second half but couldn't keep it going as Golden State missed a chance to be the first team to 30 victories and had a season low in points.

"Everyone's throwing everything at him," coach Steve Kerr said. "Their best defender. Their double teams. They're trying to make it as difficult as possible. I thought tonight he pressed a little bit. He's trying hard to get out of it."

Andrew Wiggins scored 17 points for Golden State. At 29-8, the Warriors dropped into a tie with the Phoenix Suns for the best record in the NBA.

Dorian Finney-Smith scored 15 of his 17 points in the second half and had nine rebounds and two blocks - one when he stripped Draymond Green on a dunk attempt and the other when Curry drove for a layup.

The Warriors were down nine but getting stops late in the fourth quarter when Curry missed badly from 3, and Jalen Brunson scored the next four points to put Dallas up 13. Brunson finished with 15 points. The Warriors shot a season-worst 18% from 3 (5 of 28).

"Dallas played great defense tonight," Kerr said. "They were the more physical team. I thought they just took it to us right from the beginning of the game. We just couldn't find a rhythm."

Warriors: Gary Payton II had his third career double-double with 11 points and 11 rebounds, one off his career high in boards. ... Otto Porter Jr. (left foot) and Andre Iguodala (right knee) both sat the front end of a back-to-back.

Mavericks: Porzingis missed his second game because of COVID-19 protocols while Boban Marjanovic was sidelined for a fifth straight game and Trey Burke his eighth. ... Tim Hardaway Jr. scored 14 points, and Maxi Kleber had 10 rebounds.

Golden State offered its tribute to Nowitzki in a video during a third-quarter timeout. There were recorded messages from Curry, Klay Thompson, Kevon Looney, Andre Iguodala and Green, who joked about two pump-fakes from an aging Nowitzki on the same sequence that fooled him as the video showed the highlight.

"An icon," Curry said after the game. "He did it his way, playing with the same franchise for 21 years. Just what he meant to the city, to this organization. He opened up the gates for international players to believe they could have amazing careers in the NBA and give them confidence."

Warriors: At New Orleans to finish a back-to-back Thursday night. Golden State is 3-2 on the second night of back-to-backs.

Mavericks: At Houston on Friday night.