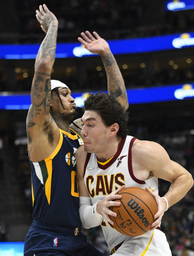 Stevens finished with a career-high in points for the second time in three games.

"He's just being him," Garland said. "He's playing aggressive on both sides of the ball."

Jordan Clarkson scored 22 points for the Jazz. Eric Paschall added 18 points, and Donovan Mitchell had 17. Utah lost its fourth consecutive game and suffered a wire-to-wire loss for the first time in 117 games.

With centers Rudy Gobert, Hassan Whiteside and Udoka Azubuike and forward Rudy Gay in COVID-19 health and safety protocols, the Jazz went with 6-foot-5 Royce O'Neale as their starting center.

It gave Utah a rare size disadvantage in the post, especially facing a frontcourt consisting of 7-footers Markkanen and Mobley and 6-foot-11 Jarrett Allen.

"Obviously, it's a little difficult being against a team that's got like three 7-footers but we go out there and we try and do the right things," Paschall said. "They were just a really big team."

Cleveland took advantage of the small lineup and never trailed. The Cavaliers had a 50-32 rebounding edge and outscored Utah 60-36 in the paint.

"We didn't change," Cavaliers coach JB Bickerstaff said. "That's the most important thing. We didn't start messing with the game. We took all 48 minutes of it seriously."

The Jazz erased an 11-point deficit late in the first quarter with baskets on seven consecutive possessions. Clarkson drove for a layup to kickstart the run and scored back-to-back baskets to help Utah tie it at 24.

Cleveland gradually built up a double-digit lead again before halftime. Love and Markkanen made back-to-back baskets to ignite a 14-4 run that put the Cavaliers up 50-36 midway through the second quarter.

Mitchell and Bogdanovic made back-to-back 3-pointers to cut it to 62-58 early in the third quarter. Cleveland answered with a 21-0 run to keep Utah from erasing a lead once again. Stevens scored on four straight possessions to fuel the spurt and finished it off with a dunk that gave the Cavaliers an 83-58 lead.

He scored one less point in the third quarter than Utah totaled as a team.

"I got lost in the moment," Stevens said. "I was able to pick and choose my spots. I just felt really confident, and I was just riding that confidence and allowing my game to just take me to those 15 points."

The Jazz went 5 1/2 minutes without scoring during the third quarter.

Cavaliers: Rajon Rondo was inactive (right hamstring soreness). . Stevens scored the Cavaliers' first 13 points of the third quarter. He singlehandedly outscored Utah 13-6 over the first five minutes of the second half.

Jazz: Denzel Valentine made his Jazz debut after signing a 10-day contract Monday. He had five points and three rebounds in 17 minutes. Valentine appeared in 22 games with the Cavaliers this season. . Joe Ingles was ejected with 6:24 left in the second quarter after picking up his second technical foul. Ingles picked up his first technical at the 8:32 mark in the first quarter. He missed Utah's previous four games after testing positive for COVID-19.

The Jazz tallied four technical fouls, their most in a game since finishing with five against the Pacers on November 11th. In addition to Ingles getting a pair of technicals, Bojan Bogdanovic was whistled for one with 34 seconds left in the first half. Clarkson also got called for a technical on a defensive three seconds violation late in the first quarter.

"We got hung up in some individual confrontations with referees that I thought distracted us," Jazz coach Quin Snyder said. "Regardless of whether the call is right or wrong - we can't have that in a game like this because your margin for error is so small."

Garland and Mobley sparked the Cleveland offense by combining for 22 assists. They doubled Utah's 11 assists - the lowest single-game total for the Jazz since January 2018 - by themselves. The duo scored or assisted 32 of the Cavaliers' 43 baskets.

For Garland, it is the third time in five games he has dished out 10 or more assists.

"I'm the leader of this team," Garland said. "As I go, I try to make my teammates go for sure."

Jazz: At Denver on Sunday night.