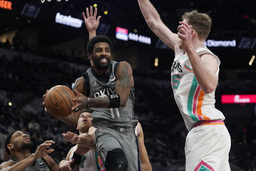 Murray had 25 points, 12 rebounds and 10 assists for his second straight triple-double and 13th of his career, one shy of David Robinson's franchise record. Harden's triple-double was his 66th, which is eighth on the all-time list.

"(Harden) got into his groove," Brooklyn's Patty Mills said. "He felt where he could make an impact on the game. Got into the paint, obviously shot it well and as well from the 3. When he has that variety, he gets it going pretty quickly and pretty easily."

Kyrie Irving scored 24 points and LaMarcus Aldridge added 16 for the Nets, who are missing star Kevin Durant because of a knee injury.

Brooklyn's fifth straight victory over San Antonio marked a successful homecoming for Aldridge and Mills. Both were honored with video tributes and received loud ovations during introductions. Aldridge finished with 16 points and Mills had nine points.

"We knew how emotional it was for Patty and L.A. to come back to San Antonio, so I'm just happy we could get a win for them," Harden said.

White exited the game with 6:16 remaining after taking an elbow to the nose from Harden on a missed layup. White remained on the court for about 30 seconds before slowing rising and exiting with a towel pressed firmly to his nose while Harden clutched his elbow. White returned to close out the final 2 1/2 minutes of the quarter.

Harden responded with eight straight points, including an emphatic dunk over 7-foot Jakob Poeltl and a three-point play. He finished with 23 points in the second half.

White finished with 17 points for San Antonio, and Poeltl added 15 points and 11 rebounds.

Brooklyn also became more physical in the paint defensively and closed the third quarter with dunks by Aldridge and Bruce Brown as part of a 6-0 run for a 79-74 lead.

"I think tonight proved to ourselves that we can play that quality of defense that we've shown patches of in past games," Mills said.

"That's an inordinate number of misses in the paint," Spurs coach Gregg Popovich said. "That's pretty tough to do. And if you combine that with 27% shooting from 3, you are going to have a problem because obviously James and Kyrie are tough to handle and they did what they are supposed to do, and they got us."

Mills and Aldridge said they were touched by the 2-minute tribute video the Spurs showed prior to tipoff.

"To be able to get a welcome back was special," Mills said. "A lot of memories come flooding back just from being back in the building. It was a special night."

The Nets watched the video alongside the former Spurs players and congratulated them.

"It was better than my video," Harden said, smiling. "I almost wanted a redo or make-up or to cry with them. It was special."

Nets: Mills played his first game in San Antonio as a visitor since March 28, 2011. It was his fifth career game against the Spurs, including the Nets' home victory Jan. 9. Mills played his first two seasons with Portland prior to a 10-year career in San Antonio. He signed with Brooklyn in the offseason. ... Durant missed his third straight game with sprained left MCL ... DeAndre' Bembry returned after missing two consecutive games with a back injury. ... Joe Harris remains out after undergoing left ankle surgery Nov. 29. He was expected to miss four to eight weeks, which would bring him back in early February. Harris was averaging 11.3 points and shooting 47% on 3-pointers in 14 games before the injury. ... The Nets are 16-5 on the road.

Spurs: Murray and Robinson are the only Spurs players to have consecutive triple-doubles in franchise history. ... Popovich was assessed a technical foul with 7:15 remaining after demonstratively arguing a non-call. Popovich apparently believed Kessler Edwards had traveled, as did most of the Spurs' fans. ... San Antonio is 8-9 with its regular starting lineup and 9-20 with different lineups. ... Spurs assistants Becky Hammon, Mitch Johnson and Darius Songaila remain in the league's health and safety protocols.

Nets: At Minnesota on Sunday.