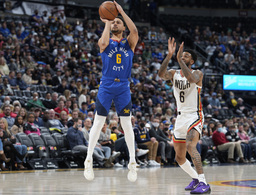 DENVER (AP) Herbert Jones scored 18 of his 25 points in the fourth quarter, Brandon Ingram had 23 points and 12 assists, and the New Orleans Pelicans sent the Denver Nuggets to their third straight loss, 113-105 on Friday night.

Jones, a rookie second-round pick, never scored more than 21 points in his four-year career Alabama. The 6-foot-8 forward hit 8 of 10 shots and all six free throws to finish one point shy of the career-high he set against Cleveland on Dec. 28.

"Even though he's a rookie, it just seems like he's been in the league five or six years the way he processes the game," Pelicans coach Willie Green said. "He knew he had a mismatch and he just took advantage of an opportunity late in the game."

Jaxson Hayes went 9 of 9 from the field and added 22 points and 11 rebounds as the Pelicans shot 56% from the field in their second straight win. They beat Denver for the first time in three tries this season.

"I actually thought I had missed (a shot), but I came into the locker room after the game and everyone told me I didn't miss," Hayes said. "That's always good."

Denver's Nikola Jokic returned after a one-game absence with a sore toe and had 25 points, 12 rebounds and nine assists, but was limited to 10 shots while being frustrated by constant double teams. Monte Morris scored 19 points and Will Barton had 17 for Denver, which lost in it first game following a 4-2 road trip.

"Third quarter they shot 65(%), fourth quarter they shot 73(%). Those are embarrassing numbers," Nuggets coach Michael Malone said. "That's not even remotely close to a team that is giving forth the necessary effort on defense."

Jokic committed his fourth turnover, and that led to a Jones layup that put New Orleans ahead to stay with 4:41 left.

Denver committed seven of its 15 turnovers in the final period.

"I think the whole night, even on easy passes, the ball was slipping out of our hands," Jokic said.

Jones later stole the ball from Davon Reed, starting in place of Gordon, and dunked to make it 103-97 with 3:32 left. The Pelicans were never threatened again as they shot 11 for 15 in the fourth quarter and 68.8% for the second half.

"He's just finding his spots. He knows when to cut to the basket," Ingram said of Jones. "He's an extremely hard worker, so when we pass it to him in that corner or we need him to slot, he's extremely confident to knock a shot down. I've got to say, he's been big for us all season."

Nuggets: C DeMarcus Cousins (foot) was active but didn't play. His 10-day contract expires after Sunday's game against Brooklyn. ... New Denver Broncos coach Nathaniel Hackett was cheered as he enthusiastically banged the Nuggets drum before the start of the second half.

When the Pelicans announced on Dec. 16 that star Zion Williamson received an injection to promote healing in his broken right foot, they indicated the next update would be in four to six weeks.

But Williamson's progress remains unknown, even as the Pelicans have been mentioned in reports as wanting to acquire a scoring guard ahead of Thursday's trade deadline to pair with Williamson.

"If something becomes real or serious, it's something we need to talk about," Green said of the trade discussions.

Malone said the injuries to Jamal Murray (knee surgery) and Michael Porter Jr. (back surgery) will be factored into any possible Denver trades.

"I don't know when Jamal and Michael are coming back, whether it's this season or next year. But what I do know is next season and they're healthy, we're a completely different team," Malone said. "So any moves that you potentially make, have to have that in mind."