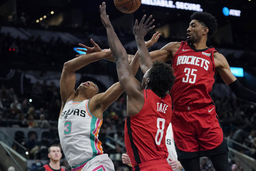 SAN ANTONIO (AP) Keldon Johnson had 28 points and the San Antonio Spurs punctuated Zach Collins' return from a nearly two-year absence with a 131-106 victory over the Houston Rockets on Friday night.

Collins had 10 points to help San Antonio snap a three-game skid. The 7-foot former Gonzaga star had not played an NBA game since Aug. 15, 2020, with the Portland Trail Blazers. He had two operations on his left foot over the 10 months and signed with the Spurs in the offseason.

"It's surreal," Collins said. "I brought my parents out here. I made them come out here for my first game. I just kept talking about it. It's crazy that we're here. A year and some change ago, I was dealing with that second surgery in (Las) Vegas away from Portland and now we're here and all that's behind me. It's just a crazy feeling. I'm super happy."

Murray, Poeltl and Doug McDermott were back for the Spurs after missing a blowout loss to Miami on Thursday night with injuries, but it was Collins' return that San Antonio awaited all season.

"Yeah, he is a talented young man," Spurs coach Gregg Popovich said. "He is physical. He doesn't shy away from contact. He can play out on the floor. He can play on the block. And he showed that."

Collins had an immediate impact, providing San Antonio with needed energy and length off the bench after entering the game with 5:21 remaining in the first quarter. He had three points and three rebounds in three minutes in his first run since playing seven minutes against Memphis in the league's inaugural play-in game.

"I was hitting (every emotion)," Collins said. "Nervous, anxious, excited. I tried to calm myself down, but I couldn't. Usually when I'm nervous, I get out there and start playing, I'm fine, but definitely in that first half I still had those emotions. I was a little bit nervous, and I was a little bit shocked to be back in an NBA game."

Collins added four rebounds and an assist in 11 minutes. He made his only 3-point attempt and finished 4 for 6 from the field.

"He's pretty big and he can shoot the ball," Houston forward KJ Martin said. "We felt his presence."

Collins helped San Antonio earn a 68-48 advantage in the paint.

McDermott added 19 points, shooting 5 for 6 on 3-pointers as the Spurs snapped a two-game skid at home.

The Spurs won their final home game before embarking on a near monthlong road trip as the San Antonio Stock Show & Rodeo takes over the AT&T Center.

Rockets: Eric Gordon has started 34 straight games after coming off the bench in the team's first 11 contests. After opening the season 1-10, Houston is 14-27 since Gordon became a starter. He had nine points against the Spurs. . Houston is 7-21 on the road. . Rookie forward Usman Garuba missed his 10th straight game with a fractured left wrist. Garuba is out indefinitely. . Houston is 5-29 in games decided by 10 or more points.

Spurs: Collins had three points and a rebound in seven minutes in his previous appearance, a 126-122 victory over Memphis to earn the 8th seed in the 2020 playoffs. . C Jock Landale remains out in concussion protocol after being hit in the head Tuesday night against Golden State. . Johnson averaged 15.1 points and 6.1 rebounds in his previous 10 games. . The Spurs are 3-6 in the Southwest Division.

Murray wasn't upset that he was not selected as an All-Star despite having 10 triple-doubles this season and posting career-highs in points, assists, rebounds and steals.

"I'm not going to be mad (or) angry about it," Murray said. "Didn't make it. As far as everyone that made it, well deserved. Good for them. Just to be in the conversation, where I come from, it's still unbelievable for me each and every day."

Spurs: At Cleveland on Wednesday night.