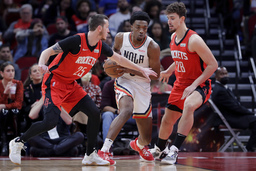 HOUSTON (AP) Brandon Ingram scored 33 points and tied a career high with 12 assists as the New Orleans Pelicans used a big third quarter to take control of the game and get a 120-107 win over the Houston Rockets on Sunday night.

It was the third consecutive victory for New Orleans and Houston's sixth loss in seven games.

The Pelicans, who limped out to a 1-12 start, improved to 21-32 with the win, moving them into 10th place in the Western Conference.

"I've just been encouraged just by the work that everybody's been putting in every single day," Ingram said. "We always had a goal to get to the playoffs and it's looking like a real thing right now. So we have to continue working."

Houston led by five at halftime but Ingram scored 17 points to power a 38-point third quarter by the Pelicans that gave them a 10-point lead entering the fourth and the Rockets didn't lead again.

"He's just a student of the game, he's always watching film to find out what he can do to make the team better," Green said. "It was beautiful basketball to watch tonight."

It's the eighth time this season where Ingram has scored at least 30 points. Jaxson Hayes added 21 points for the Pelicans.

"Jaxson had another brilliant night," Green said. "All the things that we're asking him to do he's doing."

The Pelicans were up by seven early in the fourth quarter before a 7-0 run pushed it to 99-85 with eight minutes to go. Houston used an 8-2 spurt, with 3-pointers from Kenyon Martin and Jae'Sean Tate, to get to 101-93 with about five minutes left.

Jonas Valanciunas scored all the points for New Orleans in a 7-1 run after that extended the lead to 108-94 about 90 seconds later. Ingram grabbed a steal at the end of that stretch and dished a no-look pass to Valanciunas for an alley-oop dunk.

The Rockets were led by Christian Wood, who had 22 points, and Garrison Mathews and rookie Jalen Green had 18 points apiece.

Coach Stephen Silas was disappointed by his team's 16 turnovers, but said the mistakes are not due to a lack of effort.

Houston led by 11 early in the third quarter before the Pelicans scored the next 13 points to take a 62-60 lead with 8 1/2 minutes left in the quarter. Valanciunas got things going with a 3-pointer and Ingram had the last eight points in that stretch capped by a 3.

The Rockets got a pair of free throws from Wood before Ingram struck again, hitting another free throw to make it 65-62 about two minutes later. A 9-2 run by the Pelicans later in the third extended their lead to 76-70.

New Orleans remained up by 6 late in the third before ending the quarter with a 6-2 run, highlighted by a 3 from Jose Alvarado, to make it 87-77 entering the fourth.

Alvarado sat on the front row during Ingram's post-game news conference and waited until reporters had finished their questions before raising his hand to take his turn. Ingram finally pointed at him and the gregarious Alvarado asked a question about himself saying: "how is it to play with... No. 15?"

Ingram covered his face with his hand before teasing him a bit with his answer.

"He's a pest on the defensive end," he said. "On the offensive end I wish he would shoot the basketball."

At that, Alvarado, who had nine points, walked out of the room laughing.