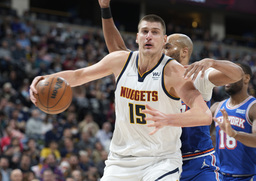 DENVER (AP) Rookie Bones Hyland scored 22 points, Nikola Jokic had 21 and the Denver Nuggets beat New York 132-115 on Tuesday night, sending the Knicks to a fourth consecutive loss and the 10th in their last 12 games.

JaMychal Green and Will Barton added 20 points apiece and Aaron Gordon had 19 for Denver, which has won consecutive games after losing three in a row. It was their ninth win in a row against the Knicks and 14th straight against New York in Denver.

Trailing by 23 at halftime, the Knicks pulled within 13 in the fourth quarter, but that would be as close as they could get. Jokic hit a turnaround jumper and a couple of free throws and Barton added a pair of baskets around a layup by Alec Burks as the Nuggets rebuilt their lead to 19 points with just over three minutes remaining.

"We just gave them whatever they wanted," Randle said. "Cuts. They're a great cutting team and we didn't really have good body position on their cuts and it opens up everything else for them."

The Nuggets turned a two-point lead into a 22-point advantage with a 22-2 run in the middle of the second quarter. Denver's reserves were on the floor for much of the flurry, including Hyland, who ignited the run with a mid-range jumper and capped it with a step-back 3-pointer over a fallen Kemba Walker that put Denver up 66-44 with 6:03 left in the period. "The chemistry with each and every one of us is getting tighter," Hyland said of the second unit's performance. "We're trusting in each other. We're going to miss shots, but I think we're more and more confident in each other when shots are going up. I know with JaMychal, Zeke (Nnaji), the whole the second unit, whenever we shoot shots I think it's going in. We're used to playing with each other now."

Denver led by as many as 27 points before settling for an 83-60 halftime lead. The first-half point total was a season high, eclipsing the 77 points the Nuggets scored against Houston on Jan. 1.

"The first quarter, I thought we played well," Knicks coach Tom Thibodeau said. "The starters got us off to a good start, both offensively and defensively. And then we lost our defensive component. We gave up 40 in the first quarter and 43 in the second. Hard to win like that. The second half there was good fight to work our way back into it." TIP-INS

Knicks: F Nerlens Noel (knee) and C Mitchell Robinson (back) missed the game. G Quentin Grimes also was scratched due to a knee injury. . C Taj Gibson fouled out with 3:56 remaining. . New York is 0-3 on its five-game road trip.

Nuggets: G Austin Rivers was held out of the game because of right hip flexor tightness. . Malone said he expects C-F DeMarcus Cousins to be re-signed by the Nuggets at some point in the coming days or weeks. The club has one open roster spot and it may wait until after Thursday's trade deadline in case it swings a deal. Cousins' initial 10-day contract expired Monday. He averaged 6.0 points and 7.0 rebounds in five games as the primary backup to Jokic. The Nuggets went 5-0 in games in which Cousins appeared.

Nuggets: At Boston on Friday night.