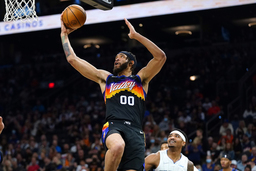 Chris Paul recorded his 30th double-double of the season with 10 points and 15 assists, and the Suns had nine players score in double figures. Phoenix has won 16 of 17 games and owns the NBA's best record at 46-10.

The Magic were led by rookie guard Jalen Suggs, who scored 20 points, two shy of his career-high, and had a season-high 10 assists. Cole Anthony scored 17 points, and Chuma Okeke had 15 points off the bench.

The Suns had a season-high 40 assists and just seven turnovers.

"That's an unreal ratio," coach Monty Williams said. "But the ability, the will to turn down a decent shot or a good shot for a great shot, that's who we are. That's our DNA. That's who we have to be if we want to do something really, really special, which we believe we can."

Williams said the Suns' unselfishness is directly influenced by how Paul plays.

"It's probably the foundation of it all," he said. ... "One thing that connects a team is passing the ball and I think our guys understand that."

Magic coach Jamahl Mosley said the Suns set an example for his team on how to play the game.

"You talk about what they've done and how they do it and the chemistry which they have and we talk about our guys being able to play in that same fashion," he said.

Said Booker: "It's just the way we play."

The Magic cut the lead to 69-61 early in the third quarter. The Suns responded with a 12-2 run, sparked by eight points from Booker and a 3-pointer from Paul.

Suns: Phoenix had 21 assists on its 28 first-quarter field goals. . The Suns scored 40 points in the paint in the first half. . Monty Williams challenged a foul call on JaVale McGee early in the fourth quarter, but the call was upheld.

Magic: Suggs limped off the court with 7:14 in the third quarter and rode an exercise bike while talking to an Orlando trainer. He returned to the game at the start of the fourth quarter. . Wendell Carter had

14 points and 11 rebounds, his 23rd double-double of the season.