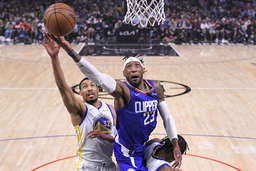 LOS ANGELES (AP) Terance Mann and the Los Angeles Clippers are beginning to prove they can consistently overcome big games by opposing superstars.

After weathering a 45-point performance from Luca Doncic to defeat Dallas on Saturday, the Clippers were able to withstand a huge first half from Stephen Curry before taking control in the second and beating the Golden State Warriors 119-104 on Monday night.

"It felt like Steph vs. the Clippers (in the first half). I was proud of the way we continued to play," said Reggie Jackson, who had 19 points for Los Angeles. "It was fun competing against a great team."

Curry ended up with a game-high 33 points, including eight 3-pointers. The All-Star guard hit his first six shots, including four from beyond the arc, and had 26 points in the first half on 9-of-11 shooting before going cold in the second. Curry was 2 of 7 from the field after halftime.

"I had two good floaters to start the game and kind of got in a good rhythm. We just couldn't get any momentum at all during the game," Curry said.

The Warriors (42-16) have dropped three of four to fall five games behind Phoenix for the top spot in the NBA standings. They are only two games ahead of Memphis for second place in the Western Conference.

Mann tied a regular-season career high with 25 points, including 14 in the decisive third quarter, as all five Clippers starters scored in double figures. Ivica Zubac had 18 points and eight rebounds.

Mann was 6 of 7 from the field in the third as the Clippers outscored the Warriors 33-19. The third-year guard also had seven rebounds and six assists.

"It wasn't easy in the first half. There was one play where Steph was bobbling the ball on the way up and made it," Mann said. "You have no choice but to adjust. The next possession is coming."

"I thought this was one of our most complete of the season even with Steph getting off to the start he had," Lue said. "We kept them out of transition. When you're scoring, you can stay out of transition most of the time."

Golden State has the top-ranked defense in the league, but coach Steve Kerr isn't happy with his team's recent stretch.

"Our defense has just been bad for six, seven games now. It's hard to win in this league when you're looking like we are defensively, with so many holes," he said.

"We have to hold each other accountable and we need to challenge ourselves. It can't just be the coaches," Curry said.

Los Angeles was up 61-59 at halftime and still had a two-point lead early in the third quarter before breaking it open with a 20-8 run over a six-minute span, including eight straight to start it off. Zubac scored six points during the spurt.

Curry's four-point play pulled the Warriors to 84-75 before the Clippers countered with a 10-3 run to end the quarter, with all the points coming from Mann.

Los Angeles' largest lead was 25 in the fourth. The Clippers outscored the Warriors 54-40 in the paint and had 14 points off 14 Warriors turnovers.

Warriors: The 26 points by Curry were his second-most in a first half this season. He had 28 against the Clippers on Oct. 21.

Clippers: Play at Phoenix on Tuesday night. The teams have split their first two meetings this season.