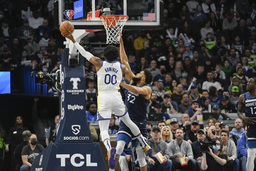 MINNEAPOLIS (AP) Karl-Anthony Towns took this game over like the All-Star that he is. The Minnesota Timberwolves performed like the playoff team they're on track to be.

Towns had 39 points and nine rebounds for the Timberwolves, who had their offense and defense humming inside and out in a 129-114 victory over the sputtering Golden State Warriors in a potential postseason series preview on Tuesday night.

"You're playing the Golden State Warriors, you know how everyone feels about that. You wake up with a different energy and a different vibe," Towns said.

And when he learned Anthony Edwards would be sitting out with knee tendinitis?

"It just raised the competitive juices in me," said Towns, who went 14 for 22 from the floor.

D'Angelo Russell pitched in 22 points, and Malik Beasley added 20 points on 6-for-9 shooting from 3-point range for Minnesota. The Timberwolves owned a 54-42 edge in points in the paint, with the banged-up Warriors mostly out of answers for containing Towns around the basket.

"Nights like tonight where you just don't play a good brand of basketball defensively to give yourself a chance to win on the road against a team that you allow to have life all night, you're not going to win a lot of games that way," Curry said.

Gary Payton II added 14 points for the Warriors, who have the NBA's second-best record but have lost six of their last eight games.

"We're going to be fine long-term. I'm excited about our team and excited about where we can go, but we've just got to weather this storm," coach Steve Kerr said.

The Timberwolves (34-29), who entered the evening 3 1/2 games out of the No. 6 spot in the Western Conference with the play-in avoidance that comes with it, won their sixth straight game against the Warriors at home. They moved a season-best five games above the .500 mark.

The Warriors (43-19), who are suddenly in quite the fight in trying to fend off Memphis (43-20) for second place, were without Klay Thompson for the second straight game because of an illness.

Nemanja Bjelica was held out with a bruised quadriceps, and Moses Moody - who started again at forward with Thompson sidelined - departed in the first quarter with a bruised left eye after a collision with Towns under the basket. Then there's the continued absence of Draymond Green and James Wiseman and the lack of depth to fill in the post.

Andrew Wiggins had eight points in the first 3:08 of the game against his former team, but he went quiet the rest of the way and finished with 12 points on 5-for-13 shooting.

This matchup of the two most frequent 3-point shooting teams in the league was mostly in Minnesota's control, starting with an 18-5 run to close the first quarter. Russell converted a three-point play for a 68-56 lead just before halftime, and the Timberwolves stretched a 14-3 spurt well into the fourth quarter before Towns checked back in for the final stretch.

"He played hard, played to exhaustion," coach Chris Finch said. "At one point he had to ask to come out. Super inspirational for his guys tonight."

Edwards missed a game to injury for the first time in his two-year career, having been out for six games earlier this season due to COVID-19.

Finch said the team will have to manage the condition for the rest of the season and that "everything is on the table" in terms of an extended rest plan. Edwards went 3 for 28 from 3-point range and averaged only 10.4 points over the last five games.

Moody's eye was swollen shut, according to Kerr. Payton has been playing through shin pain. Thompson, who could return for the next game, remains on a minute restriction in his ramp-up from a torn Achilles tendon that kept him out of last season. Green is several weeks from returning from his back injury. Wiseman has been practicing but has yet to play this season after knee surgery.

Warriors: Jordan Poole is 1 for 10 from 3-point range in the last two games. ... Andre Iguodala missed a sixth straight game with lower back tightness.

Timberwolves: This was the 12th game this season for Towns with 30-plus points and the 90th of his seven-year career. ... Jarred Vanderbilt, who was listed as questionable with left shoulder soreness, played 24 minutes with two points and eight rebounds.