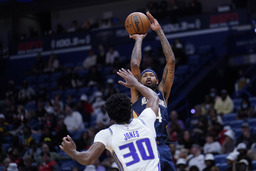 Ingram scored 28 of his points before being briefly forced out of the game by an elbow to the face from Damian Jones. But he returned in the fourth quarter to make a tough turnaround, a transition 3-pointer and a couple of heady assists that helped New Orleans snuff out any hope the Kings had of coming back.

"It was a normal basketball play where he was just trying to get to the rim; he caught me under by lip," said Ingram, who received two stitches to close up the laceration. "I wanted to get back in the game, especially if the Kings made a run back at it. ... I'd seen the ball go in a lot tonight, so I was just ready to get back out there."

Ingram was named to his first and only All-Star game three seasons ago, when his coach was Alvin Gentry, now the interim coach for the Kings.

"Yes, I'm impressed," Gentry said about Ingram. "Am I surprised? Heck no. I've seen that before."

Jonas Valanciunas had 17 points and 14 rebounds, and CJ McCollum had 17 points and a season-high nine assists for the Pelicans. They've won three straight to remain firmly in contention for a Western Conference play-in spot.

When Jones "has games like this, it triggers everybody," Green said. "The kid is just continuing to improve. His confidence is growing and we're blessed to have him."

The Pelicans opened a 15-point lead in the third quarter with a 17-5 run that included a pair of jumpers by Ingram, a dunk and layup by Valanciunas, a 3 by Jones and McCollum's driving floater off the glass to ignite the pivotal surge.

Marshall opened the fourth with seven quick points, including a 3 and a reverse layup on a feed from McCollum to give New Orleans a 105-84 lead with 10:12 to go.

"There were too many fast breaks where we never got matched up," Gentry said. "They got separation because of our transition defense."

Ingram hit 11 of his first 14 shots on a combination of mid-range jumpers and driving dunks, giving him 24 points in the first half.

"Not only did he get it going, but the guys were all looking for him," Green said of Ingram. "Every time they got the ball, they were looking to run plays just to feed him. And it's beautiful to watch the connectivity of our guys."

"In the first half, I think we did a good job," Fox said. "BI made a lot of tough shots in the first half. And in the second half, they hit us first and they never looked back."

Pelicans: Jaxson Hayes scored 13 points, making five of six shots. ... Outrebounded the Kings 50-38. ... Valanciunas, in his 10th NBA season, scored his 9,000th career point on a banked 3-pointer that gave him five points in the first minute of the game.

The Pelicans wore yellow socks to symbolize their solidarity with Ukraine during a large-scale invasion of that country by Russian military.

Green said the idea came up in Los Angeles, where the Pelicans concluded a recent road trip on Sunday night against the Lakers.

Valanciunas, who is from Lithuania, along Russia's western border, has been following the conflict closely and discussing it with teammates.

"It's a big mess. We're just trying to bring more attention," Valanciunas said. "Innocent people are still dying. The whole world is talking about sanctions, support, prayers, but something else has to be done because the war is still going on."

Kings: Visit San Antonio on Thursday night for their fourth stop on a five-game trip.