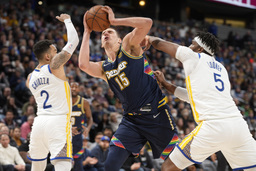 DENVER (AP) Nikola Jokic had his second triple-double in as many nights with 32 points, 15 rebounds and 13 assists, leading the Denver Nuggets to a 131-124 win over the short-handed Golden State Warriors on Monday night.

Jokic has recorded triple-doubles in 11 of his last 23 games, and leads the league with 18 this season. The reigning NBA MVP was coming off a 46-point, 12-rebound and 11-assist game in a 138-130 win over New Orleans on Sunday.

Monte Morris and Jeff Green added 18 points apiece for the Nuggets, who have won 11 of 13 and moved to 13 games over .500 for the first time this season. "We did a good job today in sharing the ball and finishing, scoring-wise," Jokic said. "We ran very well in transition. It's always nice to have 30-plus assists (as a team)."

The Warriors were playing with a depleted lineup after coach Steve Kerr announced Saturday that Stephen Curry, Klay Thompson and Andrew Wiggins would miss the game to rest. Andre Iguodala and Gary Payton Jr. also were unavailable due to injuries.

Jordan Poole scored 32 points and Moses Moody 30 for the Warriors, who lost their fifth in a row and seventh in eight games. Golden State fell to 0-3 against the Nuggets this season.

Monday's game was a makeup of a Dec. 30 game postponed due to a COVID-19 outbreak that left the Nuggets without eight healthy players, the league mandated minimum to take the floor. But that resulted in the Warriors, who have another game in Denver on Thursday night, having to play at altitude twice in four days. Golden State has a Tuesday night game against the Los Angeles Clippers in San Francisco.

"It puts us in a way tougher spot than them," Kerr said prior to the game. "We had to fly here again. They didn't have to make an extra trip. They've got to play a back-to-back, I know. This was just another in many, many games rescheduled around the league that are inconvenient for everybody, but necessary to keep the league going, so you just do what you have to do."

The Nuggets also are enduring a scheduling crunch, playing four games in five days and facing the Warriors both times in the second game of back-to-back this week.

"Every coach has to do what is best for their team," Nuggets coach Michaell Malone said, adding that he expects to see the Warriors full complement of players when they make the return trip to Denver.

A 3-pointer by Poole pulled the Warriors to 117-114 with 4:57 remaining, but Austin Rivers had a jumper and a breakaway dunk sandwiched around Kevon Looney's dunk for five-point Denver advantage with 2:29 remaining.

Jokic converted a three-point play, hit a floater in the lane and made another free throw to help the Nuggets hang on for the win. "Really good experience for our young guys, to be thrust into a position where they had to take on different roles, different responsibilities, competed and had a chance," Kerr said. "That's all you could ask, give ourselves a chance in the last few minutes, we just couldn't close." MVP CONSIDERATION

Kerr said Jokic's strong play this season is deserving of another MVP award. "I don't have a vote, but Jokic is just an unbelievable player and was spectacular tonight," the Warriors coach said. "He makes his teammates better, he makes defense so difficult because no matter what you do he's got a counter for it."

Warriors: F Otto Porter Jr. was ruled out prior to the game because of non-COVID illness. "He's just feeling sick and won't play," Kerr said. "He's going to sit out and hopefully, he'll feel better tomorrow." . F Draymond Green, sidelined since early January with a back injury, is coming along well in his rehabilitation and progressing toward his return, though the Warriors would not put a timetable on it. "We're optimistic," Kerr said. "He's had about a week, week and a half of being on the court almost every day, getting a lot of shots up, scrimmaging. He's feeling a lot better and coming along, but still no target date."

Nuggets: F Will Barton left Sunday night's overtime win against New Orleans early because of a left ankle. "It's not anything too serious, but just too sore to give it a go tonight," coach Michael Malone said. ... Jokic has 75 career triple doubles, three shy of tying Wilt Chamberlain for most by a center in NBA history.

Nuggets: Travel to Sacramento to play the Kings on Wednesday night.