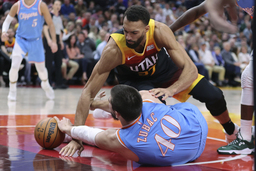 SALT LAKE CITY (AP) Rudy Gobert had 19 points, 16 rebounds and two blocks, and Jared Butler set career highs with 21 points and seven assists to lead the Utah Jazz to a 121-92 victory over the Los Angeles Clippers on Friday night.

Jordan Clarkson added 20 points, Eric Paschall 17 and Nickeil Alexander-Walker finished with 13 points in his first start for Utah, which was without Donovan Mitchell and Bojan Bogdanovic.

Robert Covington led Los Angeles with 18 points. Luke Kennard added 14 points and Terence Mann 13 as the Clippers shot just 27.5% from the field in the first half and trailed wire to wire.

With Gobert leading the way, the Jazz outscored the Clippers 56-32 in the paint and 24-10 in second-chance points.

"We didn't give them any opportunity to get back in the game," Gobert said. "Everyone was already locked in defensively and then offensively we know we're going to score. We've got a lot of talent."

Mitchell sat out with a right calf contusion, while Bogdanovic missed his third straight game because of a left calf strain.

But even without their top two scorers, the Jazz never skipped a beat offensively in the first half.

Utah raced out to a 17-4 lead less than five minutes into the first quarter. The Jazz scored on their first four possessions and shot 7 of 9 to start. Alexander-Walker accounted for three of the baskets while filling in for Mitchell.

Los Angeles closed to within 27-20 on a 3-pointer by Covington. But the Clippers' would-be rally unraveled when Utah ran away in the second quarter.

"They made a lot of shots, they got out, and we didn't make shots," Covington said. "Their defense really amped up, they created a lot of steals, created a lot of fast-break possessions, they had 56 points in the paint and scored 121 - that's hard."

The Jazz closed the half on a 30-4 run to take a 71-34 halftime lead. Gobert made five baskets to fuel the run and totaled 11 points in the second quarter. As a team, Utah outscored Los Angeles 41-14 in the second quarter and allowed the Clippers to make just four baskets.

"We had a lot of guys that stepped up tonight and were ready to play with a number of guys out," Jazz coach Quin Snyder said. "We were connected defensively, particularly the second group. They were switching and did a good job of boxing people out. Just the activity was good."

Utah led by as many as 41 in the second half, taking a 93-52 lead on a finger-roll layup by Clarkson.

Clippers: Isaiah Hartenstein finished with a team-high nine rebounds and a season-high eight assists. ... Mann was whistled for a technical foul with 6:56 left in the fourth. ... No Los Angeles starter scored in double figures.

Jazz: Alexander-Walker is averaging 14.5 points on 45% shooting in his last two games after scoring nine points in his first seven games with Utah. ... The Jazz shot 51% from the field over the first three quarters.