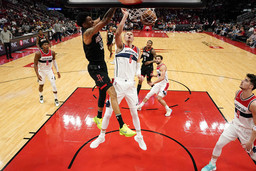 Wood set career highs with eight 3-pointers and 39 points as the Rockets used a huge second-half run to rally for a 115-97 win over the Washington Wizards.

"This is one of those feel-good games, probably the most fun I've had all season," Wood said. "Everything was just clicking for me."

The Rockets trailed by 23 in the first half but slowly trimmed the deficit before going on a 16-0 spurt over the last minute of the third quarter and the first four minutes of the fourth to take the lead.

Wood made eight of nine attempts from 3-point range, connecting four times in the fourth quarter.

Houston was up five in the fourth before scoring the next eight points, with 3s from Wood and Alperen Sengun, to make it 100-87 with 5 1/2 minutes remaining.

Kristaps Porzingis hit two free throws before the Rockets got another 3 from Wood.

Kentavious Caldwell-Pope made a layup for Washington before Wood struck again, sinking his seventh 3 to extend the lead to 106-94 and spur Wizards coach Wes Unseld Jr. to call a timeout with three minutes to go.

Wood added a three-point play on Houston's next possession to set his career best in points. He made the basket and flexed for the crowd after the ball dropped in before making the free throw to pad Houston's lead.

But he wasn't done yet. Wood hit his eighth 3-pointer on the next possession to bring fans to their feet. Soon, a few in the crowd began to chant his name.

"We knew he had the hot hand and we wanted to keep feeding him until they stopped him," rookie Jalen Green said.

It was a rare bright spot for the Rockets, who have the worst record in the NBA. Wood's big night - he finished with two more 3-pointers than the Wizards - helped Houston end a five-game skid.

Rockets coach Stephen Silas was proud of his team for fighting back after falling into such a huge hole early.

Wood had 10 rebounds to join James Harden as the only Rockets to have at least 35 points, 10 rebounds and eight 3s in a game. Harden achieved the feat five times.

"He was on fire and it was awesome," Silas said.

Porzingis had 22 points, 13 rebounds and tied a season high with six blocks for the Wizards, who lost for the seventh time in eight games.

Unseld was disappointed to see his team blow another big lead after squandering a 35-point advantage in a 116-115 loss to the Clippers on Jan. 25, the second-biggest comeback in NBA history.

"I thought we let our foot off the gas," he said. "You mess with the game, the game messes with you. And sadly, we can't seem to learn that lesson. We saw that similar game at home versus the Clippers, and apparently we have short memories."

Houston scored the last four points of the third quarter before Ish Smith was called for a flagrant-1 foul after crashing into Dennis Schroder as he shot a 3-pointer to start the fourth. He made all three free throws before Garrison Mathews hit a 3 to make it 86-83, giving the Rockets their first lead.

Porzingis received a technical for complaining about the lack of foul calls soon after that, and Schroder made another free throw. A 3-pointer by Green came next before Schroder sank a jumper to make it 92-83.

The Wizards finally got on the board in the fourth quarter on a basket by Caldwell-Pope with about 7 1/2 minutes to go.

Wood had a dunk in that stretch and capped the run with 3-pointers on consecutive possessions to help Houston close the gap.

The Wizards scored the next six points, with four free throws, to make it 83-76 with a minute left in the third.

But Green scored the last four points of the quarter, punctuated with a two-handed, alley-oop dunk to cut Washington's lead to three entering the fourth.

Wizards: Kyle Kuzma missed a second straight game with tendinitis in his right knee. ... The Wizards made three 3-pointers in the first quarter and just three after that. ... Rui Hachimura had 16 points.

Green on watching Wood make eight 3s: "I was just like in shock. When you're on the court and that's happening, someone gets hot like that, it's like, oh my god!"