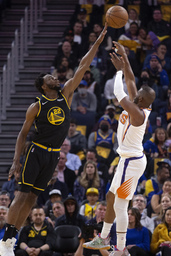 The Phoenix Suns held off the Golden State Warriors in a hard-fought, playoff-type furious finish, then went right back to work after the final buzzer like they do every game - home and away.

"That's who we are. We are a work team. Even though the studies show that lifting after a game helps with recovery, I think they really enjoy being around each other and they enjoy the work," coach Monty Williams said. "... As I've said before, our guys are chasing something. When you're chasing something, you don't want to get to whatever you're chasing and not be ready."

Devin Booker's two free throws with 34.2 seconds left put Phoenix ahead, Draymond Green traveled to turn it over before Chris Paul made a short jumper, and the NBA-best Suns beat the Warriors 107-103 on Wednesday night in a back-and-forth battle between Western Conference rivals.

Jordan Poole scored a season-best 38 points to match his career high and also contributed nine rebounds and seven assists. He had five free throws over the final 1:20.

Poole drew a loose ball foul on Booker with 39.8 seconds to go and converted two free throws before Booker came through for the Suns (62-14) in their ninth straight victory.

The Suns matched the franchise record with 62 wins, of which Booker said, "it means a lot."

"We know what we're working for, strength and conditioning is a big part of the game," he said.

Paul hit a key jumper with 1:37 to play and finished with 15 points and eight assists, Mikal Bridges scored 22 points and Deandre Ayton added 16 points and 16 rebounds for Phoenix.

"We felt like we've been there before," Paul said of the atmosphere. "Obviously this is an exciting environment playing in here, the crowd going crazy and all that but we've been playing a ton of games like that."

Green had a three-point play to tie it with 2:25 left, the Suns committed a three-second violation on the other end but Golden State didn't capitalize that sequence and Paul scored. Green and Jae Crowder had some words near mid-court after the final buzzer.

The Warriors played better defensively while again without reigning scoring champion Stephen Curry, who is nursing a foot injury that has cost him seven games.

Poole shot 11 for 22 with seven 3s as Golden State returned home from a 123-95 loss at Memphis on Monday night.

"The tough part about Jordan is he's learning how to play like Steph," Williams said before the game.

Klay Thompson shot just 5 for 21 and missed nine of his 10 3-point attempts in Golden State's fourth straight loss, seventh in eight and third in a row at Chase Center.

The Warriors had won the previous two matchups with the Suns, who have an eight-game road winning streak. Phoenix overcame shooting 7 for 28 on 3-pointers.

The teams split the season series at two games apiece.

Golden State coach Steve Kerr told his team during a morning meeting how well the Warriors played defense in previous meetings with Phoenix and that they were capable of doing so again despite the recent struggles.

"Draymond took a step tonight," Kerr said of the improvements on both ends.

Curry is yet to resume on-court basketball activities while working back from a sprained left foot, but has been working on a treadmill in the water and in the weight room. He could be back to shooting soon.

Golden State dropped to 1-6 without him during this stretch.

Suns: Phoenix won on the Warriors' home floor for the first time in four tries since a 121-110 victory on Oct. 30, 2019. ... The Suns won last season's matchups 2-1 for their first victorious season series since taking all four meetings in 2010-11. Phoenix is 19-3 on the road vs. the Western Conference. ... Cam Johnson missed his 13th game straight game with a right quad contusion. ... JaVale McGee remained out because of a non-COVID illness, missing his second in a row and this one against his former team.

Warriors: Gary Payton II left for the locker room with 8:43 remaining but returned at the 4:54 mark to provide a key defensive presence down the stretch. ... The Warriors came off a stretch with five games over eight days to now having three games in an eight-day stretch during which they won't have to leave the state.

Suns: At Grizzlies on Friday night having won two straight in Memphis.

Warriors: Host Jazz on Saturday night having won the last three meetings with Utah at home before finishing a home-road back-to-back at Sacramento on Sunday.