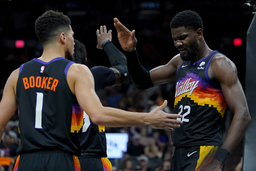 PHOENIX (AP) Chris Paul has built a Hall of Fame-caliber career by passing the ball.

He can also shoot it quite well, if needed.

Paul scored 19 of his 30 points during a brilliant fourth-quarter scoring display and the Phoenix Suns beat the New Orleans Pelicans 110-99 on Sunday night in Game 1 of the first-round playoff series.

The top-seeded Suns needed Paul's big finish despite dominating most of the game. The Pelicans shook off a slow start, cutting a 23-point deficit to 79-71 by the end of the third.

New Orleans kept hitting shots in the fourth, but that's when Paul took over, hitting three 3-pointers and a layup in 2 1/2 minutes in a flurry that kept the Pelicans chasing. The ageless veteran will turn 37 later in these playoffs if the Suns advance far enough, but once again looked a decade younger.

Paul - a proud basketball junkie - said taking over a game is all about feel.

"It's just reading the game," Paul said. "We watch games all day, every day. We got to watch all the games yesterday. We watched the games today. We know in the playoffs, teams aren't going to lay down."

Paul has never won a championship, falling just short last year when the Suns lost to the Bucks in six games in the Finals. He's fond of saying he never takes postseason basketball for granted and his 130th career playoff game was among his best.

Game 2 is Tuesday night in Phoenix.

The Suns were 47-0 in the regular season when leading after three quarters. Now they're 1-0 in the playoffs. Paul shot 12 for 16 from the field, including 4 of 6 on 3-pointers. He scored 17 straight points for the Suns at one point in the fourth.

Booker - who finished with 25 points - hit a 3-pointer on the opening possession and the Suns never trailed, using a ferocious defensive effort to quickly take control. Phoenix led 53-34 by halftime, forcing the Pelicans into just 11 of 49 shooting (22%) before the break.

Suns big man Deandre Ayton was particularly dominant on the defensive end with four blocks, and had 21 points and nine rebounds. At one point in the third quarter, he swatted a shot from Jonas Valanciunas and turned toward the crowd, screaming as the fans returned a roar in approval.

CJ McCollum led the Pelicans with 25 points, but struggled with his shooting much of the night. He finished 9 of 25 from the field. Valanciunas added 18 points and 25 rebounds. Brandon Ingram scored 18 points.

The Pelicans had some good moments, particularly during their third quarter rally. It didn't lead to a win, but it's something they can build on for Game 2.

"We figured out a way to play," Pelicans forward Larry Nance Jr. said. "This is the playoffs and there are going to be ebbs and flows, ups and downs. We are in a chess match now."

New Orleans made its surprise trip to the playoffs by winning two games in the play-in tournament, beating the Los Angeles Clippers 105-101 on Friday night.

That gave the Pelicans plenty of momentum, but the Suns had the fresh legs and it showed.

The Suns' initial energy was impressive, particularly on the defensive end. They led by 16 at one point in the first quarter before settling for a 28-16 advantage going into the second.

It's no secret Williams and Pelicans coach Willie Green are close friends and colleagues.

Green was Williams' lead assistant last season during the Suns' run to the Finals before earning the head coaching job in New Orleans during the offseason.

Williams said he texted Green to congratulate him following the Pelicans' win over the Clippers on Friday. Otherwise, he said there's been no communcation.

"We haven't had some long, drawn-out conversation with violins playing behind us or anything like that," Williams said before the game. "We've got to prepare our teams to play. I'm looking forward to the competition."

Suns: G Landry Shamet (sprained left foot) missed practice on Friday but was listed as available on Sunday. He didn't play. ... Cam Johnson finished with 13 points on 5-of-6 shooting. JaVale McGee added seven points and seven rebounds. ... Mikal Bridges was called for a technical foul in the fourth quarter.