Gobert leads Jazz over Nuggets 122-110 as Jokic gets hurt 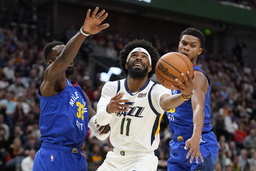 Gobert had 23 points and 16 rebounds and Donovan Mitchell added 22 points to lead the Utah Jazz to a 122-110 win over the Denver Nuggets on Tuesday night in a game where Jokic left with a knee injury.

"When we share the ball on offense, then our defense gets better. I like when that happens and that's when we play our best basketball," said Gobert, who had 14 points and eight rebounds in the fourth quarter.

His teammates repeatedly found him near the hoop and the Nuggets even tried Hack-a-Rudy to no avail. The three-time Defensive Player of the Year also short-circuited the Denver offense when it mattered most.

The reigning NBA MVP had 24 points in just 15 first-half minutes before he got hurt.

Mike Conley and Bojan Bogdanovic each contributed 15 for the Jazz, who moved to 3-0 on the season.

Two minutes before halftime, Jokic banged knees with Gobert and stayed down holding his right leg. He eventually got up with assistance and limped to the locker room. He will be examined again, but initial injury report was a knee contusion.

"I went up to Nikola as he was warming up at halftime. I said, `How do you feel?' He said `It feels a little weak' and I just shut him down. I took the decision (out of his hands). It's not his decision to make," Malone said. "He's far too important to this team for us to risk him being out there if he's not feeling confident about it."

Will Barton scored 21 points, Aaron Gordon had 20 points, and Monte Morris added 19 for the Nuggets, who dropped to 2-2. After period of lights-out shooting, Denver went 7-for-19 from the field in the fourth quarter.

"It was just tough. We never really play without Nikola. He's a big piece of our offense. Just putting guys in different positions and (other) things. It was tough at times," Morris said about Denver's flagging finish.

Denver took its last lead at 93-91 before Gobert fueled Utah's decisive move. His free throws finished an 11-2 run and the Jazz stayed in front the rest of the way.

"I was mad at myself for missing four free throws in the first half so it gave me a great opportunity to redeem myself," Gobert said.

The game had high emotion uncharacteristic for an early-season encounter. It boiled over with 4:57 remaining when Hassan Whiteside and JaMychal Green started pushing, bumping and jawing - but not throwing punches -- before teammates and security separated the pair.

Both were assessed technical fouls and ejected from the game.

"That's how I grew up. That's New York City basketball at its finest. We're now embracing it as a group, as well," Mitchell said. "The biggest thing for us is to be able to still execute while being pushed."

The two teams have recent history of shootouts, including a memorable series in The NBA Playoff bubble in 2020. This had all the same traits until the Nuggets ran out of gas. Denver also dropped a game to Cleveland, 99-87, on Monday night in the front end of their back-to-back.

The Jazz, who had the best record in the regular season last season, are working with the same primary group of players and looked dominant for most of the first two games. But the Nuggets carved the Utah defense with ball movement, advantages on Jazz switches, and pinpoint shooting.

Gordon and Jokic combined to make their first 11 field goal attempts of the game but the Nuggets devolved into a series of ineffective one-on-one isolations down the stretch while the Jazz were getting layups and free throws on the other end.

"That was a winnable game for us. We gave away a lot of possessions -- too many possessions to win," Gordon said.

Jazz: Utah successfully challenge a blocking foul call on Mitchell in third quarter. ... Mitchell was made 1 of 9 from beyond the 3-point line. ... Gobert made 8 of 10 free throws after making just one of his first six.

Ingles made his 1,000th career 3-pointer and Clarkson crossed the 8,000-point mark. The pair were the two finalists Sixth Man of Year last season (Clarkson won the award). Utah coach Quin Snyder though both of their contributions were key.

"Every time Jordan is on balance and goes up, you think it's going to go in . and I thought Joe, when they were switching or blitzing, used his size and his ability to pass, find people and make it easier on everyone," Snyder said.