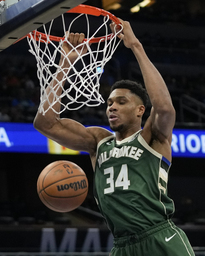 ORLANDO, Fla. (AP) Giannis Antetokounmpo scored five of his 34 points in the final two minutes Monday night to help the Milwaukee Bucks hold off a late Orlando rally in a 109-102 win over the Magic.

Franz Wagner led Orlando with 25 points. Markelle Fultz and Paolo Banchero added 20 points each. Banchero also had 12 rebounds for the Magic, who lost their ninth straight.

A reversal of a charging call against Antetokounmpo with exactly two minutes left in the game gave Milwaukee a big boost.

After a 3-pointer by Terrence Ross got Orlando within four points with 2:20 left, Antetokounmpo was called for a charge. But officials reversed the ruling, putting the Bucks star at the line and fouling Orlando's Moritz Wagner out of the game.

"It was a big play. It's good officiating," said Bucks coach Mike Budenholzer. "It wasn't a challenge. We were going to challenge it, but they went to the officiating review based on the restricted area. It's very, very important.

"It's a big swing. Mo Wagner was very good for them tonight, and for him to not be able to finish the last few minutes."

During the review, the officials determined that Wagner had not set his feet in advance of the contact with Antetokounmpo.

"Honestly, you never want to be in a position at the end of a game to not have the power," said Wagner, who had 19 points and 12 rebounds. "So even if (the call) went my way, I still put myself in that position with cheap fouls. I regret those three cheap fouls that I got before that. But that's life, and I've got to do better next time."

Antetokounmpo made one free throw and scored on a subsequent layup, putting the Bucs up 104-97 with 1:22 remaining.

"As I've said, 10 games ago, I wasn't at my best," Antetokounmpo said. "Now I'm making some. I'm shooting it better and hopefully I can keep this up. And I believe I'm going to keep this up."

Antetokounmpo, Sandro Mamukelashvili and Holiday hit 3-pointers on a 16-0 Milwaukee run midway through the first half while Orlando went scoreless for 5 1/2 minutes. The spurt left the Bucks with an 11-point lead that they stretched to 19 late in the third period.

Fultz and Banchero led a charge to get the Magic back in it. A layup by Franz Wagner trimmed Milwaukee's lead to 98-92 with 3:30 left and the Magic missed several open 3-point shots with a chance to get closer. They shot 8 for 32 for the game from behind the arc.

Antetokounmpo finished with 13 rebounds and five assists and Magic coach Jamahl Mosley said his team defended him about as well it could.

"I think they did a great job of building a wall in front of Giannis," Mosley said. "I know he got downhill a few times and he's tough to stop. Understanding that he's MVP (caliber), our guys did as best they could standing in front of him."

Bucks: The Bucks have beaten the Magic 12 straight times. ... AJ Green had 12 points in 10 minutes off the bench. ... C Brook Lopez got the night off, leaving George Hill as the only Buck to have played in all 23 games. ... G Grayson Allen was out with a foot injury.