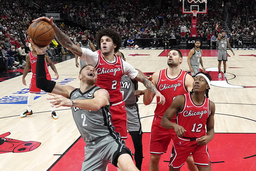 CHICAGO (AP) Chicago Bulls guard Lonzo Ball will have arthroscopic surgery on his left knee and is expected to be out six to eight weeks, the team announced Thursday.

Ball has missed three games since a 42-point loss to Golden State last week. Coach Billy Donovan said Wednesday the team had switched up his treatment, hoping he would avoid surgery, after he didn't respond well to the initial regimen. Ball had the same knee scoped in 2018 when he was with the Lakers.

Acquired from New Orleans in a sign-and-trade deal, Ball has been a major contributor in Chicago's rise to the top of the Eastern Conference. He is averaging 13 points, 5.4 rebounds and 5.1 assists. A disruptive defender on the perimeter, he is sixth in the league in steals at 1.8 per game.

Chicago (28-15) was tied with Miami for the East lead through Wednesday, after four straight losing seasons. The Bulls visit Milwaukee on Friday to start a three-game trip that also takes them to Orlando and Miami.

With Ball out and star Zach LaVine (sore left knee) sidelined, the Bulls are leaning more on Coby White and rookie Ayo Dosunmu.