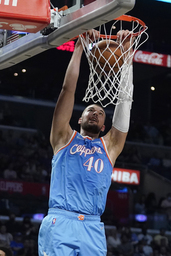 The team had declined its $7.5 million option on the 25-year-old from Croatia, setting up the new deal that keeps the 7-footer as the club's longest-tenured player.

"For four seasons, Zu has been a pillar of our team, durable and dependable," director of basketball operations Lawrence Frank said. "He is a reliable teammate and a consistent pro, just entering the prime of his career. We are excited to continue growing with him."

He spent his first two seasons in the NBA with the Los Angeles Lakers.

Forward Robert Covington had already signed an extension with the Clippers.