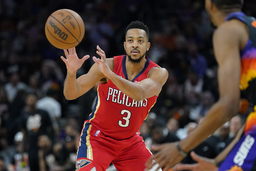 NEW ORLEANS (AP) Pelicans guard CJ McCollum has agreed to a two-year, $64 million contract extension that runs through the 2025-2026 season, a person familiar with the situation said Saturday.

The person spoke to The Associated Press on condition of anonymity because the Pelicans have not announced the deal, which was first reported by ESPN.

McCollum was acquired from Portland shortly before last season's trade deadline and averaged 24.3 points after the trade, helping the Pelicans rally into playoff contention.

The extension means the Pelicans will have their core of McCollum, power forward Zion Williamson and high-scoring wing player Brandon Ingram all under contract through the next three seasons.

McCollum, who turned 31 this month, is a nine-year NBA veteran who has averaged 19.2 points for his career, and 20-plus points in each of the past seven seasons.

After rallying to qualify for the Western Conference play-in tournament last spring, New Orleans beat San Antonio at home and then downed the Clippers in Los Angeles to advance to a first-round series against top-seeded Phoenix.

The Pelicans took two of the first four games of their best-of-seven series with the Suns before falling in six games.

Williamson did not play at all last season because of a foot injury the previous summer. He has since been cleared to play without restrictions.

The Pelicans are scheduled to open training camp on Tuesday.