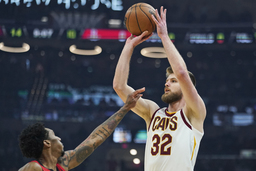 CLEVELAND (AP) Cavaliers forward Dean Wade has agreed to terms on a three-year, $18.5 million contract extension with Cleveland, a person familiar with the negotiations told The Associated Press on Saturday.

Wade, who will compete in training camp for a spot in Cleveland's starting lineup, will receive $16.5 million guaranteed, said the person who spoke on condition of anonymity because the deal has not been signed.

Wade was set to enter his final year under contract after the Cavs exercised his fourth-year team option in June.

The 25-year-old has developed into a dependable rotational player since joining the Cavs as an undrafted two-way player in 2019 from Kansas State.

With Lauri Markkanen being traded to Utah in the blockbuster Donovan Mitchell deal this summer, the Cavs will be looking for a starting small forward and Wade is expected to get strong consideration.

Last season, the 6-foot-9 Wade averaged 5.3 points and 2.9 rebounds in 51 games before suffering a knee injury that kept him out of the final 15 games. He made 28 starts as the Cavs, who improved their win total by 22 games, dealt with an assortment of injuries.